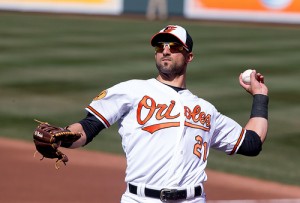 Keith Law of ESPN decided to redraft 2003.  With the 4th overall selection OF Nick Markakis was the Padres pick (original pick Tim Stauffer).  From the 2003 draft, six Padres selections have made the major leagues:

*denotes played for the Padres

Only Stauffer and Delabar have a positive WAR.  Delabar is currently with the Toronto Blue Jays and is 3-1 with a 1.96 ERA in 19 games.

A few things of note, the Dodgers and Rangers both had two selections in this top 10.  The Padres current outfielder Carlos Quentin was selected 19th in this re-draft.

Personally I would have selected San Diego native Adam Jones over Markakis, but that’s just me.