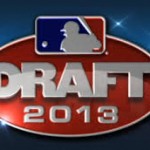 With the 13th pick of the first round of the 2013 draft the San Diego Padres picked Mississippi St University outfielder Hunter Renfroe. Rated at #28 by Jonathan Mayo of mlb.com, Renfroe was the one player I left off my pre-draft list that was projected to be on the Padres draft board.

My reason? He needs the most development of any of the college players available and his upside is the most debated. Moving from a small high school to a powerful division in college baseball (SEC), Renfroe really struggled his first two seasons then had a break out Jr year with a .352/ .440/ .634 line in 59 games. He hit 15 2B, 2 3B, 15 HR and had 58 RBI. He also stole 9 bases. 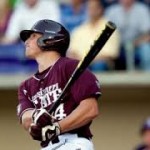 At 6-2 and 216 lbs, he’s probably close to his full size. Baseball America had him rated as the top corner outfielder and 11th best prospect in the draft but many scouts were concerned about his lack of consistent production. So, is he a developing diamond in the rough or a one hit wonder? That is something we will find out over the next couple seasons as he attempts to develop in the Padres system. If you want to lay eyes on him yourself, he will be playing for Miss in this weekend’s Super Regionals in Charlottsville, VA.

Renfroe was scouted and picked by Padres scout Andrew Salvo. 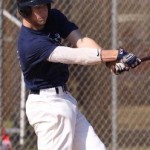 In the second round of the 2013 draft (#50 )the San Diego Padres selected Shortstop Dustin Peterson from Gilbert High School in AZ. The younger brother of #12first round pick DJ Peterson, the 6-2  and 185 lb Sr hit .540 with 11 2B, 6 3B, 10 HR and 39 RBI for his season. According to the rankings of mlb.com (by Jonathan Mayo), Peterson has a short, compact swing with plus bat speed and will hit for average and power. He has good hands, and a solid arm defensively but there is doubt that he can stick at short. Padres scouting director, Billy Gasparino, as quoted in an article by Corey Brock of mlb.com, stated that if Peterson doesn’t have the skills to stick st short he could profile elsewhere in the infield.

Peterson was scouted and picked by Padres scout Dave Lottsfeldt. 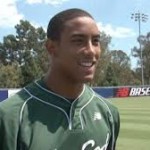 In the supplemental, competitive balance round of the MLB draft (#69) the Padres selected Junipero Serra High School outfielder Jordan Paroubeck of San Mateo, CA. At 6-2 and 190 lb, the switch hitter has some projection but shows raw tools now. His father is friends with former big leaguer Barry Bonds and Paroubeck has been getting private hitting lessons. We will try not to hold that against him.

He has a commitment to Fresno St but I doubt that the Padres would have selected him this high unless they were confident he would sign. In an article by Corey Brock of mlb.com, Padres scouting director, Billy Gasparino, outlines his five tool potential as a centerfielder or right fielder. Jonathan Mayo of mlb.com rated him with a loose and easy swing, good power with a strong and accurate arm, and a good runner.  He did show a good average (.402) and OBP (.540) as a senior in 34 games.

The third through 40th rounds occur June 7 and 8 on mlb.com and check back on Monday for a rundown on the rest of the draft class.