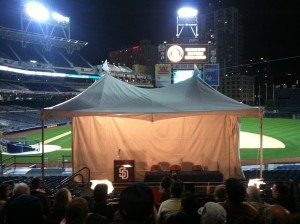 Tonight was the Padres inaugural Membership Meeting in which Padres Members (formerly known as “Season Ticket Holders”) congregated in a slightly drizzly event at PETCO Park. It was a fun environment. I got to meet a few people, and get to see some other people I had not seen since, well, the end of last baseball season. Also, I had the honor of being the Padres “official member tweeter” of the night. The Padres official Twitter account was retweeting some of my tweets of the night with the hash-tag of #PadresMember. That was pretty cool. With this event tonight, it just signifies that baseball is rapidly approaching. January is almost over and we just have to suffer through the doldrums of February until Spring Training is upon us. We can do this, guys.

The format was kind of reminiscent of 2011. When I saw the venue, thoughts came to mind of “I’ve heard and seen this before”.

I’m referring to more specifically seeing Orlando Hudson come onto the stage to the cheers of many then season ticket holders and talk this and that on how he’s going to contribute…and then the next two seasons happened. But I put aside that trepidation and continued to enjoy the event put on for the Padres. 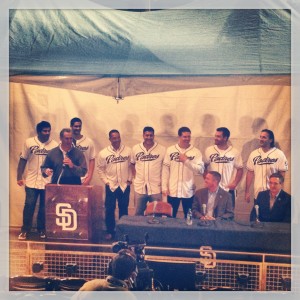 The panel of speakers featured Tom Garfinkel, Peter Seidler, Buddy Bud Black, and General Manager Josh Byrnes. In addition, several players were showcased which include, Chris Denorfia, Logan Forsythe, Nick Hundley, Cory Luebke, and Carlos Quentin. CQ had an opportunity to address the audience. I thought CQ was a well-spoken individual and he totally looks younger in person than on TV.

They were fairly candid with the members. Bud Black even said that “the first 60 days…we were not good” and even better, Bud Black put Volquez on blast saying “Volquez has to pitch better”. Atta boy! Tom Garfinkel (as well as Josh Byrnes) also addressed the very palpable dissatisfaction with the apparent “standing pat” this off-season. Garfinkel responded with “when there is an opportunity we like, we will strike” and Byrnes also added to that saying “we might add someone between now and opening day” with regards to starting pitching. Several of the fans had the opportunity to ask their questions and the aforementioned displeasure with the off-season was addressed. Questions were asked on where the new TV money was going, and about the Padres starting pitching. Felt some appreciation for my fellow fan in addressing these really key concerns! Good job, guys! 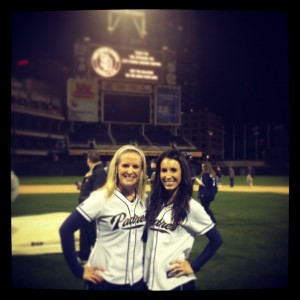 Overall, I knew what kind of event it was. It was a “hey, we know you’re dropping some (serious) coin on us and this is why you did it!”. In otherwords, it was a sales meeting. Some of the response felt a little canned to me but I’m not really going to grind them about that. I feel like Josh Byrnes knows that there is a spotlight on him. In fact he even said that while they are kind of riding on the momentum of 2012, he know that it is his job to make the team better and that fans are obviously paying attention as noted by the questions asked. I wish I actually talked with Josh but I caved in to my childhood desire to play on a Major League Baseball field and he had already left.

Although can you blame me? When am I gonna have the next chance to stand at first base? Anyway, am I mad that I dropped some pretty good coin on the Padres after this event and hearing the responses, no. I’m a baseball fan through and through. But, as the season progresses and things don’t appear to improve, I may have to evaluate how much (if any) I want to contribute. This new Padres Membership, I view as I’m an actual investor much like a shareholder. I expect dividends. While my dividend won’t be cash, it should be wins. I see wins come out, I will say I’ve made a good investment.