2013 Padres Top Prospects: Outside Looking In 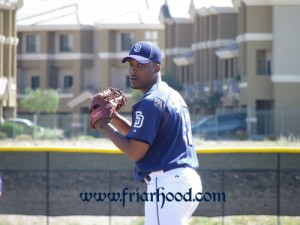 Wieland was acquired with Robbie Erlin from the Texas Rangers in exchange for RP Mike Adams at the trade deadline in 2011.  Wieland was promoted to the big leagues after just two starts at AAA Tucson in 2012.

After just five starts with the San Diego Padres, Wieland suffered an elbow injury that resulted in Tommy John surgery.  He will be out until after the 2013 all-star break.  The only publication to rank Wieland in the top 10 was Baseball America.  After ranking the right-hander #7 in 2012, he only dropped one slot to #8.

“Wieland doesn’t light up radar guns, but his stuff worked against big leaguers because he has plus command.  He relies on precise location of a 90-91 mph fastball that peaks at 94 with late life” – Matt Eddy, Baseball America

Sampson made the jump from low-A to AA San Antonio in 2012.  A combination of Sampson’s strong 2011 and the hitter friendly Cal League made it an easy decision for the Padres to have Sampson skip over Lake Elsinore.  Sampson had an up and down season, while playing through a leg injury, but in July he compiled a nice stat line.

Sampson did rank 8th on minorleagueball.com and 9th on madfriars.com

Acquired with Alexi Amarista in exchange for Ernesto Frieri in 2012, Roach did not disappoint.  At Lake Elsinore Roach appeared in 8 games compiling a 5-1 record with a 4-1 k/bb ratio in 46.2 innings of work.  After a mid-season promotion to AA San Antonio, Roach appeared in four games, completing 17 innings, while striking out five, walking 8, and allowing three earned runs.

Roach was ranked 9th on minorleagueball.com

“Has the best sinker in the minor leagues and knows how to use it, mixing it with solid splitter and curveball. Combined 11-2, 1.88 ERA in 105 innings with 78/22 K/BB, 3.53 GO/AO in his first year as a starter. Should develop into mid-rotation workhorse.” – John Sickles, minorleagueball.com

This is a projection pick more than anything.  Eflin was selected in compensation round of the 2012 draft (33rd overall).  Eflin contracted mono shortly after he started appearing in games for the Arizona Padres.  In four games, Eflin completed seven innings, allowing six earned runs on nine hits, while striking out four and walking three.

Eflin was ranked 10th on fangraphs.com

“The right-hander has a solid fastball in the 89-94 mph range with an outstanding changeup. His breaking ball is currently below average but has the potential to be average or better in time.” – Marc Hulet, fangraphs.com

“The big Oklahoma Sooner had an impressive professional debut in hitter friendly Lake Elsinore. The 6’4″ right-hander from Tyler, Texas has a tall frame and clean mechanics and an easy delivery that should keep him away from arm injuries, with a big fastball than can touch 98 mph and a good breaking ball.” – madfriars.com staff