SAN DIEGO – The San Diego Padres today released the club’s schedule for the 2014 regular season.  The team will open the season at Petco Park on Monday, March 31, beginning a three-game series and a three-game homestand against the Los Angeles Dodgers.

Following the opening series, the Padres will travel to Miami and Cleveland before returning home to host the Detroit Tigers for the first weekend series of the year at Petco Park from April 11-13, to begin one of four 10-game homestands in 2014.

Interleague play in 2014 will bring the Tigers (April 11-13), Kansas City Royals (May 5-7) and Minnesota Twins (May 20-21) to San Diego, with the Tigers and Twins making their second appearance at Petco Park while the Royals make their third.  The Padres will also host their natural rivals, the Seattle Mariners, as part of a four-game home and away series beginning in Seattle from June 16-19 with two at Safeco Field (June 16-17) and two at Petco Park (June 18-19).  Interleague play will also include trips to Cleveland (April 7-9), Chicago-AL (May 30-June 1) and Minnesota (August 5-6).

The Padres will wrap up their home season with a 10-game homestand from September 15-24, hosting the Phillies, Giants and Rockies, before going on the road for the final four games of the regular season in San Francisco (September 25-28).

Fans who wish to receive notification regarding updates to the 2014 schedule may sign up for Padres email or text notifications at www.padres.com/updates.  Seat locations for 2014 Memberships go on-sale Monday, September 16th.  In addition to the traditional benefits of season tickets, Members are able to enjoy access to more customized, year-round benefits, events and discounts than ever before.  For more information on Padres Memberships call 619.795.5555 or visit www.padres.com/membership.

Please note: the schedule and opponents are subject to change. Start times will be announced at a later date. Please see the attached document for the full 2014 schedule. 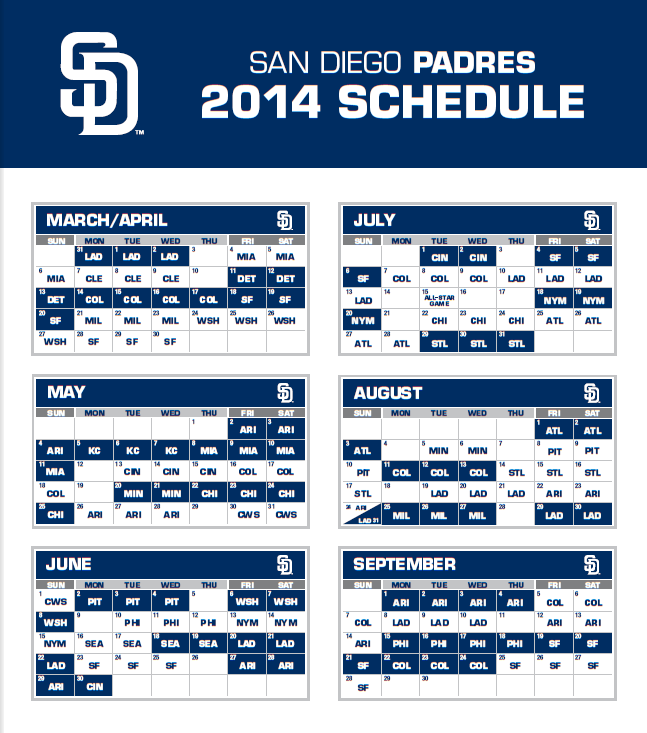