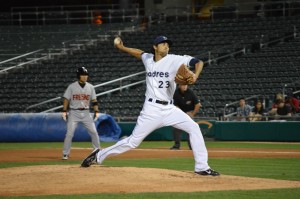 The Tucson Padres started off its fourth week of play one game below .500 with a record of 11-12. The team will finish off the month of April on the road against the Tacoma Rainiers.

Tucson will finish off the week heading to Salt Lake City to take on the Bees in a four game series. The T-Pads are hoping to add to its two game win streak.

The T-Pads were unable to push enough runs across the plate as it started off the week losing 4-1 against the Rainiers on Monday April 29.

Starting pitcher Eddie Bonine(0-2) recorded his second loss of the season after putting together a good outing, pitching six innings giving up two earned runs on six hits while striking out one and walking one.

Tucson only got four hits in the game, with two of the hits being singles and the other two went for doubles.

The T-Pads will send pitcher Wilfredo Boscan to the mound tomorrow and the team will try to put some more runs on the board.

Tucson was unable to get a win on the final day of April losing 4-0 in its second game against the Rainiers.

Boscan(0-1) was impressive in his first outing, throwing five innings giving up one run on three hits while striking out one and walking two on Tuesday April 30.

The team was only able to put together six hits in its losing effort against the Rainiers’ pitching staff.

Second baseman Dean Anna was the only player on the team to rack up multiple hits on the evening going 2-4 hitting two singles.

Tucson was 0-4 with runners in scoring position.

The team is looking to around its luck against the Rainiers with two games left to play before heading to play the Bees in a four game series.

The T-Pads were again unable to pull out the victory, as it lost 4-2 to the Rainiers on Wednesday May 1.

Pitcher Tim Stauffer put together another great outing throwing six innings while only giving up one earned run on three hits while striking out eight and walking three.

However, he ended up with a no decision in the contest.

Pitcher Tommy Layne(0-2) recorded his second loss of the season after coming into the game in the seventh inning.

Layne threw one and two-thirds innings giving up three earned runs on five hits while only striking out one and walking none.

The two runs scored for the T-Pads came on two solo shots, both were in the top of the sixth inning.

The first one was hit by first baseman Brandon Allen who was 1-3 in the game hitting a solo shot, collecting one RBI and scoring once.

The second home run in the inning came from Anna who was 2-3 in the game hitting a single, a home run, collecting one RBI and scoring once.

Tucson will get one last chance to get a victory in this series, to try and avoid the sweep.

The T-Pads were swept in a four game series against the Rainiers with the final loss of the series coming on Thursday May 2 as Tucson was shutout 8-0.

Pitcher Sean O’Sullivan(1-2) getting his second loss of the season after throwing five innings, giving up four earned runs on six hits while striking out a season high 11 hitters and walking only one batter.

Tucson only managed to get two hits in the game on Thursday with right fielder Jaff Decker hitting a double in the top of the second inning.

The other hit came in the top of the fifth inning when catcher Rene Rivera hit a soft single to right field.

The team will be in Salt Lake City tomorrow to start a four game series with the Bees and will try to break the current losing streak.

The T-Pads losing streak was extended to four games losing the first game in the series to the Bees 8-4 on Friday May 3.

Pitcher Thad Weber(3-1) recorded his first loss of the season, as he didn’t have his best stuff on Friday. He threw four and a third innings giving up seven earned runs on 10 hits while striking out three and walking one.

It was Weber’s shortest outing of the year. He had struggled in his previous game in April, but was able to come out on top. This game brings his ERA up to 5.06.

Tucson was able to get 10 hits on the evening, with designated hitter Travis Buck going 2-3 hitting a single, a home run, collecting two RBIs and crossing the plate twice.

Two other players on the T-Pads had multi hit games. Anna was 2-5 hitting a single, a double and scoring once.

The T-Pads will get another shot to try and break its losing streak as the team takes on the Bees in the second game of the series.

Tucson had an impressive victory over the Bees on Saturday May 4 defeating them 9-3.

Bonine started the game on Saturday, he came out of the game in the fourth inning after not being able to get an out. He went three innings giving up two earned runs on three hits while striking out two and walking six.

Pitcher Jorge Reyes(3-0) came into the game in the fourth inning to get his third win of the season after throwing three and two-thirds innings giving up no runs on one hit while striking out two and walking none.

T-Pads pitching got some help from the offense with the team getting 15 hits in the game.

Buck also had three hits in the game as he went 3-5 hitting two singles, a double, collecting one RBI and crossing the plate once.

With that win the T-Pads ended its five game losing streak. The team is going to try and turn it into a winning streak as it takes on the Bees in the third game of a four game series.

Tucson finished off its fourth week of play with a win a 6-1 victory over the Bees on Sunday May 5.

The T-Pads took the lead in the second inning of the game and never looked back. Pitcher Robbie Erlin(3-0) got his third win of the season as he threw five innings giving up zero earned runs and only two hits, while striking out three batters and walking none.

The offense was alive and well for the T-Pads on Sunday as the team accumulated 11 hits on the evening.

Third baseman Jonathan Galvez got three of those hits going 3-4 hitting three singles and crossing the plate once.

Buck also had a good night at the plate going 2-5 hitting a single, a home run, collecting three RBIs and scoring once.

Allen also managed to go yard in the game on Sunday night.

The T-Pads are currently in last place in the division with a record of 13-17, but there will be an effort to turn it around as the team will finish off its final game in a four game series in Salt Lake City, tomorrow

Both teams are in the middle of the pack in the Pacific Coast League American Southern division.

As always be sure to post any comments or questions, along with any suggestions for players that you would like me to interview.