A Quack in the Hand Worth Two in the Bush?

My head is sort of spinning with the many various ways I can begin a piece on a player named Kevin Quackenbush. So much so, in fact, that I think I’ll just let it speak for itself: Quackenbush. There, now we can all move on. 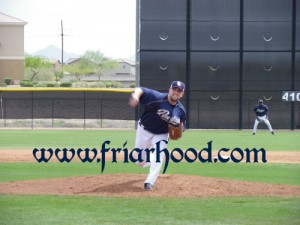 Of course, the name took on a life of its own last season during MiLB’s annual Moniker Madness, a tournament where the most colorful names in minor league baseball duked it out a la NCAA March Madness style. Quackenbush lost in the quarterfinals to Caleb Bushyhead, clearly a worthy opponent. What’s that expression about two in the bush…? Or did I get that wrong?

Okay, moving on. Despite the “setback” in the moniker contest, Quackenbush’s results on the field have been nothing short of spectacular. Ranked as the Padres’ 17th best prospect this season, there’s a very good chance you’ll see him sooner rather than later. Why? Let me count the ways.

After being drafted by the Padres in the 8th round of the 2011 amateur draft from the University of South Florida, Quackenbush has done nothing short of dominate. A closer/reliever by trade, Quackenbush pitched for both rookie league Eugene and low-A Ft. Wayne in his first full season. Between the two stops, he pitched 42.0 innings, allowing 25 hits and 3 earned runs. In those innings, are you ready for this? He struck out 71 batters. That’s a video game-like 15.2 K/9.

Last season, Quackenbush was, not surprisingly, promoted to the hitter-friendly Cal league at Lake Elsinore. With the Storm, he pitched 57.2 innings, allowing 42 hits and 6 runs. His K/9 that season was 10.9. The numbers are a bit more human, but any K/9 north of 9.0 is setting up for a shot at the majors. Additionally, he led the organization with 27 saves at Lake Elsinore, so there’s no doubt about his ability to close out games.

This season, Quackenbush was recently promoted to AAA Tucson after yet another excellent start, this time in AA San Antonio. With the Missions, Quackenbush tallied 31.0 IP and allowed 16 hits and 1 earned run. Yep. You read that correctly. ONE earned run. He struck out 46 batters for a jaw-dropping K/9 of 13.4.

Now, ERA isn’t exactly the greatest stat with which to measure a pitcher since there several variables factored into it that cannot be controlled. However, in Quackenbush’s case, it’s fun to do the math. In case you haven’t, his ERA in 2011 was 0.64. Last season, it was 0.94. So far this season, it’s 0.29. Paltry is a word.

Quackenbush features a heavy fastball that can reach 94 mph. He has a slider that could be a key pitch to improve to become dominant at the major league level. The fastball has been effective because of the deception in his delivery. He has a big frame: 6’3” 220lbs and an easy delivery. The deception comes in his arm slot. He sort of short arms the motion, keeping his pitching hand close to his body, which makes the ball difficult to pick up until it’s on the hitter. Now, unless he can develop the slider and possibly another secondary pitch, major league hitters will be able to sit fastball and will eventually touch him up. His efforts in Tucson will be worth noting. The hitters there are generally older and more experienced, so the fastball and deception will be tested.

Should all go well, there’s a good chance that Quackenbush has a legitimate shot at being the future closer of the team. Huston Street is a season and a half away from free agency, and he hasn’t been completely productive as a Padre this season. It’s very plausible that Quackenbush will make his debut this season and be given plenty of chances to show he’s up to the task. Expect him to contribute to an already-strong bullpen this season with the chance to be closer within the next two years.