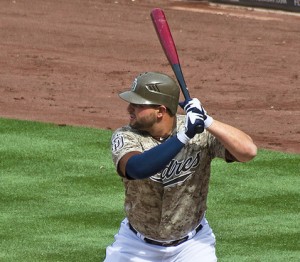 Yesterday the Padres had announced that outfielder Cameron Maybin was to be reinstated off of the 15-day disabled list and that outfielder Kyle Blanks would be taking his place down in Triple-A Tucson to make room for the roster. This turned out to be a decision made too quickly as it turned out that first baseman Yonder Alonso’s progress with his right hand contusion had taken a turn for the worse, and as such Alonso will be moved around instead of Blanks.

According to the Padres own Corey Brock, Alonso will now be heading to the disabled list following an aggravation of his right hand following yesterday’s batting practice prior to the Padres/Dodgers finale. As such, the Padres decided that Kyle Blanks, who has experience as a first baseman and is naturally inclined to play in that decision, will stay put at the big league level and remain with the club while Alonso mends his hand. Alonso’s placement on the 15-day DL will be retroactive to June 1st, so the soonest that he could rejoin the club would be June 16th.

The announcement came just before the Padres take on the Colorado Rockies at Coors field, and because of last night’s news Blanks did not fly with the team to Denver last night from Los Angeles. Blanks did however leave San Diego earlier this afternoon and should be on hand for Thursday night’s game if need be.