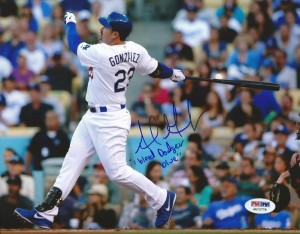 Even while in San Diego, it always seemed like Adrian Gonzalez would not be happy.  Small market, big park, no national love.  One of the greatest hitters in Padres history always seemed as though he was just playing his days out in San Diego.  Loved by the fan base and the Mexican community, a combination of his desire to pursue the big lights and ownerships unwillingness to spend money eventually led to the break up of Gonzalez with the city of San Diego.

Gonzalez eventually was traded to the Red Sox, but what some fans still fail to recognize is that he was always going to leave San Diego. He was going to turn his back on San Diego regardless.  At least the Padres were able to get a few prospects instead of draft pick compensation.  When Gonzalez was traded to the Dodgers last season, fans in San Diego had mixed feelings.  A player they loved for years was now playing for the enemy.

Adrian is a great player and in my opinion, will thrive being able to play in the shadow of a player such as Matt Kemp.  Adrian has never been a leader or one to enjoy the media.  Kemp however is a media darling and will take that pressure away from Gonzalez, allowing AGON to just play baseball.  Being a Dodger has brought out a little swagger, to the point he is willing to say “I bleed Dodger blue”.

Growing up in San Diego, Gonzalez understands better than most that his statement is a huge middle finger to all the Padres fans that supported him for years.  It’s now up to Padres fans to let Gonzalez know how they feel about his comments at the Padres home opener Tuesday, April 9th at Petco Park.

UPDATE: Adrian Gonzalez autographed approximately 200 items with the “I bleed Dodger blue” tagline this Saturday, during a paid appearance at a baseball show in Orange County.  This was a paid signing through American Icon Autographs.  After speaking with Sean Jacoby of AIA he told me, he asked Adrian before the signing to use the tagline, after a brief pause Gonzalez agreed.  AIA states that the signing fee was donated to charity.