All’s Quiet on the Western Front 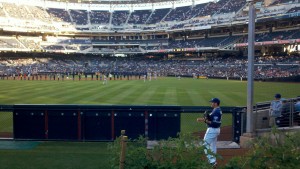 Well, there’s been little ado about nothing so far as the 2012-13 Padres’ off-season goes. That is, unless you’re riveted by the signing of 34-year old Jason Marquis. Actually, now that I mention it, I kinda am.

“Riveted” is probably too strong a word, but let’s not overlook the move. Marquis pitched some of the best baseball of his career in a Padres uniform last season. His K/9 was a respectable 7.6, a career best. His previous best was 6.8, way back in the 2001 season in Atlanta. In addition, his BB/9 was a very respectable 2.7, also a career best. His WHIP of 1.302 was…you guessed it…a career best.

I know we’re only talking about 93.2 IP here, but that’s a decent enough amount for me to have some confidence. Sure, the numbers won’t hold over the duration of the season, but let’s be realistic. If we’re relying on Marquis to lead us to the playoffs, I’ve got some beach-front property in New Mexico that might be of interest to you. He’s not signed to be our ace. He’s signed to be a back of the rotation guy at worse, an insurance policy/long reliever at best, a mentor in between, and I’m good with that. Maybe $3M is high for that slot, but the free agent market for pitching has been pretty atrocious.

I like him on the roster. Given the rate at which Padre hurlers blow out, 480 total DL days by my count, I am more than comfortable handing the ball to a rejuvenated Marquis if need be. I think his veteran presence is also needed as youth and inexperience are two words that will clearly describe this starting rotation. After 13 major league seasons, Marquis can offer up his pearls of wisdom to the likes of Cory Luebke, Tyson Ross, Anthony Bass, Casey Kelly, and Joe Wieland.

At this point, it seems the team isn’t willing to budge with its minor league talent to bring an arm in. The next month will be interesting to see if the club is willing to make a move to bring in an arm. In the mean time, this is what we have to talk about.