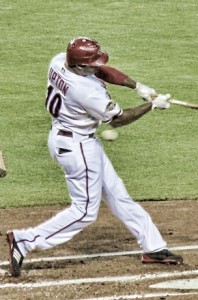 Yesterday we learned that at some point in July the Padres and Diamondbacks at least discussed the possibility of a trade involving Chase Headley and Justin Upton. Those discussions were supposed to have continued on and off since. The report on MLBTraderumors attributed that information as coming from “major league sources,” and while later confirmed by additional sources, specifically ESPN’s Jim Bowden (via Twitter) and Jack Magruder of FoxSportsArizona.com (also via Twitter), the likelihood of that deal going down is about nil. Magruder pointed out that the Friars have no interest in trading Headley and no room for either Upton or OF Jason Kubel, whom the Diamondbacks are also shopping.

Even with the rumored deal all but dead, it’s still entertaining to consider how that trade would have worked out for the Friars. Let’s assume the trade would have been a one-for-one transaction and compare the two players to see which side would have “won” the deal. Note: All advanced stats are courtesy of Fangraphs.com.

Offense: Since Headley plays in a home park notorious for suppressing offense while Upton benefits from playing half his games in a better offensive park, we’ll use wRC+ to compare the offensive production of each player. The metric adjusts for park effects and differences in league should that have been a factor.

Over the last three years, Headley has averaged a wRC+ of 126 for every 150 games played. During that same period, Upton has posted an average of 121 wRC+. Give the slight advantage to Headley.

Defense: Headley also rates higher than Upton according to the defensive metrics as his UZR/150 total over the last three seasons is 17.9 compared to the Diamondback OF’s total of 11.8.

Position: Obviously Headley and Upton play different positions on the field though both are “corner” players. One way I used to determine the relative value of their respective positions was to compare the positional adjustment Fan Graphs uses when calculating each player’s WAR. The easier the position is to defend the lower the adjustment in terms of runs.

The positional adjustment made to Upton’s WAR value has averaged -6.5 runs over the last three seasons. Conversely, Headley, by virtue of playing 3B, has been awarded an adjustment of 2.1 runs per season over that same span. That indicates that according to Fan Graphs 3B is a more difficult position to fill adequately.

Of course that’s just one way to look at value: The next step I took was to determine where each player ranked among his fellow position players in terms of offensive contributions. The fewer players who posted similar offensive production at the same position the harder it would be to replace the original player.

For example; it’s much easier to find a 1B that posts a wRC+ of 110 or better (There were 16 who posted at least that mark in 2012 while earning enough plate appearances at the position to qualify) as opposed to a SS that reach that mark (Just four hit that threshold last season).

The three-year wRC+ average of Headley (126) would have placed him in a tie for fifth place among all 3B last year. Yes, one of the players ahead of Headley would have been Headley himself. Upton, on the other hand, saw his three-year average bested by just five RF in all of baseball in 2012. What this means is it would be difficult in either case to replace the offensive contribution of either player with a comparable player at their position.

Age: Headley will be 29 in May and should be smack dab in the middle of his prime. Upton turns 26 in August and is more than three years Headley’s junior. Many in the game feel Upton has unfulfilled potential left under his ceiling. Since the two players are pretty similar production-wise at this point, Upton’s youth and further potential give him the edge here.

Salary/Cost of ownership: Upton has three years remaining on a long-term contract that will see him earn $38.5MM through 2015. Headley, barring the signing of a contract extension, is arbitration eligible in each of the next two seasons. He is projected to earn $8.3MM in 2013 according to Matt Swartz’s arbitration model which is available exclusively on MLBTR.

For this exercise we will only compare the next two seasons of contractual control since projecting what Headley could earn in year three either through free agency or as part of a long-term deal signed prior to that point is very difficult. If Headley duplicates his 2012 production in 2013 his value as a potential free agent after the 2014 season will skyrocket; perhaps to as much as $15MM per or more. If he regresses closer to the production he posted in years prior he’d more likely be a $10MM-a-year-player.

We know based on Upton’s contract he will be paid a total of $24MM over the next two seasons ($9.75MM in 2013 and $14.25MM in 2014). Assuming Swartz’s projection is accurate and knowing Headley would be virtually guaranteed a raise through arbitration in 2014 we can guesstimate he might earn as much as around $20MM over the next two campaigns.

For the next two seasons Headley should be the cheaper player to employ.

Intangible: Something I see as critically important for the Padres and their fans moving forward is the owners promise to spend money to keep core players in town. Headley is the first real test case. Here’s a guy drafted by the Padres who has developed into a legitimate star player. He may not be as big a name as Pujols or Jeter but Headley still has a chance to become the face of the Padres franchise. Trading him even for a player of equal quality would come across as same old-same old to a frustrated fan base that has seen the club trade away Adrian Gonzalez and Mat Latos in recent years.

To me, while an interesting topic of discussion, trading Headley for Upton makes little sense for San Diego. At this point Headley is a marginally better player at a tougher position to fill and should be more affordable for the next few seasons. The smart baseball move in this case would be no move at all.