And the Winner Is? Tyson Ross 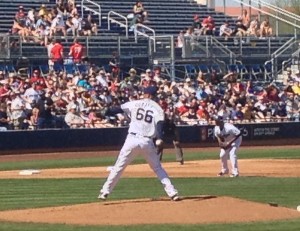 The San Diego Padres end their Spring Training marathon with the announcement of Right-hander Tyson Ross as their 5th starter. The 25 yr old, a 2nd round 2008 draftee of the Oakland Athletics, was acquired by the Padres in a trade with the A’s last November. The Padres sent utility infielder Andy Parrino and pitcher Andrew Werner to the A’s. Drafted at 6′ -5 ” and 215 lbs, Ross has grown to 6′- 6″ and 230 lbs. An imposing form on the mound, Tyson has had spotty success at best during his time with the A’s.

For his 2012 season he was 2-11 with a 6.50 ERA in 18 games and 13 games started. His history of poor command and questionable mechanics made him expendable to the A’s.

In a scouting report by John Sickels of minorleagueball.com, Ross inspired concerns over his delivery, leading to injuries and his mechanical issues the cause of his poor command. He showed a mid to high 90’s fastball, a change up that was not totally reliable but a power slider and a cutter.

In his Spring 2013 showing with the Padres, it appears Darren Balsley has worked wonders again. Ross completed his spring having achieved 15 and 1/3 straight scoreless innings at one point. He finished the spring with 22 1/3 innings pitched with 11 BB, 20 SO, 2 HRA and an ERA of 2.42. Via Padres.com, this improvement in his command has been attributed to some tweeks in his delivery, including lengthening his stride, a higher leg kick and improving his pitch selection and tempo.

Balsley has also limited Ross’ repertoire to a 2-seam and 4-seam fastball (mid to high 90’s), an above-average slider and a change up that they have been working on in an effort to slow the pitch down and provide more disparity between it and the fastball.

Ross continued to improve as the spring progressed with the decision between him and Andrew Cashner for the 5th spot seemingly an easy call. Cashner, recovering from surgery to repair a damaged tendon in his hand, had a delayed start to spring and was only able to complete 10 innings of starting prior to the last week of spring training. The other variable was the concern by the Padres organization of a too drastic jump in innings pitched for Cashner if he made the rotation as the start of the season. Now the team is able to make him the long man in the bullpen and give him a gradual increase over last year’s 69 2/3 combined innings pitched. He is also available to start in the event of an injury to a rotation member.

Having watched Ross pitch this spring, I am encouraged not just by his stuff but by his poise on the mound. He is focused and has a good game tempo. His fastball and slider are nasty and if he can perfect his change and eventually add his splitter he might have the best stuff of anyone in the rotation at this point. His upside is significant and he could develop into a dominant top half of the rotation guy. The future looks bright for Ross if he can continue to improve and be consistent.