The biggest question in fans minds heading into the 2014 Padres season is offense, or lack of.  The Padres had a quiet offseason and although did they add another outfielder in Seth Smith to the merry-go-round, no significant additions were made to the 12th ranked offense in the NL.

I’ll defer to our friends at Baseball America for some fantasy projections.

C – BA didn’t think too highly of the Padres backstops, ranking Yasmani Grandal at 35 (of 35) and not ranking Hundley at all.  Although BA expects Grandal to return to his 2012 form, it appears they don’t expect him to get a lot of playing time.

1B – Yonder Alonso ranks 31 among first baseman, but the age of 26 the front office is hoping he will come into his own this season. 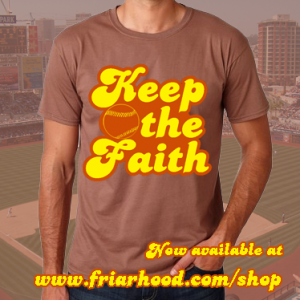 2B – Jedd Gyorko steps into his sophomore campaign with the friars coming off a power heavy rookie season, he has the best ranking of any Padres at his position coming in at #8

3B – Much has been talked about in regards to expectations for Chase Headley and who he actually is from a hitters stand point. The truth is that we may not really know until he leaves San Diego, but BA ranks him at #18

SS – Plenty of question marks swirl around the return of Everth Cabrera given his suspension for PEDs.  It appears BA thinks he can repeat his success.

OF – Given the combination of injuries and platoons most Padres OFs are not fantasy worthy, but that doesn’t stop us from looking at the projections.