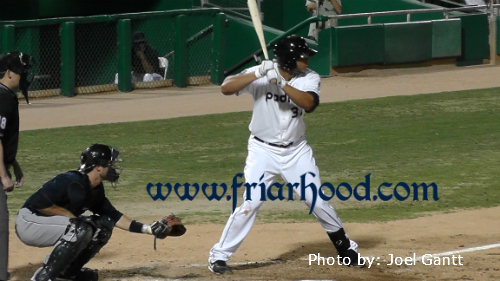 We’re all familiar with the phrase, “it’s a good problem to have,” particularly when it comes to having two or more good players who happen to occupy the same position. In some cases teams choose to demote a good young player simply to ensure he receives needed playing time in the minors as opposed to sitting on the bench in the majors. The Padres made that very decision earlier this week when they planned to send Kyle Blanks back to AAA Tucson with the return of OF Cameron Maybin from his minor league rehab assignment. As it turned out, Yonder Alonso’s fractured hand allowed the Padres to keep Blanks in the bigs but that doesn’t change the fact the Friars were making the wrong call to demote him in the first place.

I understand the argument that they wanted Blanks to get regular at bats but what I don’t understand is why they didn’t think they could get him those at bats here in San Diego. What’s the impediment? Who is blocking Blanks preventing him from getting two or three starts a week? Jesus Guzman? I don’t think so.

In 128 plate appearances this year, Blanks has a .300/.383/.527 triple-slash. Some might question whether that line is sustainable but a quick look at the stats that normally suggest sustainability indicates there is no reason Blanks can’t keep producing along those lines.

First, Blanks’ BB% of 8.6% is actually below his career rate of 9.9%. A regression to his career norm would only help his OBP.

Then if we look at his BABIP we see he is outpacing his career mark, .333 to .295. But he’s also cut down on the strikeouts, 19.5% K rate this year compared to his career rate of 29.1%. He’s making more contact which invariably leads to more hits and a higher batting average even if his BABIP does drop to somewhere closer to his career norm.

His slugging % is elevated compared to his career average but we know he has legit power and the last time he was completely healthy, 2009, he slugged .514. The power has always been there but contact issues and injuries kept him from showing it. Now he’s healthy, he’s making good contact and he’s absolutely mashing.

It wasn’t that long ago that we were all excited about Blanks’ potential. When have we ever been excited by Guzman’s potential? That would be never, Bob.

Guzman has a triple-slash of .228/.297/.326. That is god-awful. His career mark is better, .269/.333/.423, but that’s basically league average and probably below for a corner position player. A below-average career performance combined with little upside and I don’t see why Guzman has a roster spot while Blanks was going to be sent down to Tucson.

As for being able to get Blanks enough plate appearances, allow me to take care of that for you, Buddy. Does anyone think that even a “healthy” Carlos Quentin is going to play more than three out of every four games? Me either. Blanks can fill in when Q needs to give his balky knees a rest.

The left-hand hitting Alonso has traditionally not fared well against LHP posting an OPS of just .667 in his career prior to this season. He’s been better this year, .744 OPS versus hurlers of the southpaw persuasion but given Blanks has an OPS of 1.060 against lefties, I could justify giving Blanks a start in place of Alonso against some left-handed pitchers when he returns from the DL.

Let’s get to Maybin. He was horrible for the vast majority of last year and he was awful this season before hitting the DL with a wrist issue. He’s been back for three games and does have four hits in 14 AB’s but has struck out five times as well. If he’s hitting he’s playing primarily because he’s a superb defender. But if he’s scuffling at the plate then I can see starting Chris Denorfia (or Will Venable against a RHP) in center with Blanks playing in RF.

Just doing that could get Blanks four starts every eight games. That doesn’t even account for injuries and the PA’s he could get if one of the Friars corner players gets hurt. To me that’s enough playing time to warrant Blanks remaining in San Diego. I’d rather give those AB’s to someone who is going to help the Padres win games rather than someone who is not producing.