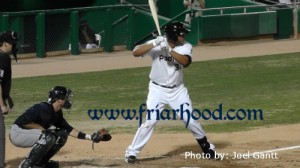 The Padres announced that Outfielder Kyle Blanks will be returning to PETCO Park Sunday, and that recently signed pitcher Thad Weber will be sent back to AAA. Weber made his Padres debut last night and pitched a career high 3.2 innings, giving up 2 runs on 3 hits. The decision to recall Blanks and replace Weber was made by GM Josh Byrnes Sunday morning.

Blanks has shown success with Tucson this season, sporting a .296 average with 4 RBI and a homerun over an eight-game span. He also showed promise in the Cactus League this spring, hitting .354 with 14 RBI and 3 homeruns. Over his career, Blanks has hit for a .219 average in parts of four major league seasons with the San Diego Padres, appearing in 143 games.