Join the Congregation!|Friday, April 23, 2021
You are here: Home » Uncategorized » Bud Black Highly Regarded in Baseball Circles Despite Lack of Postseason 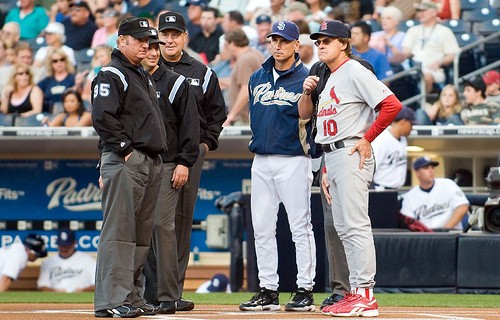 Nick Cafardo of the Boston Globe recently wrote an article ranking the top managers in MLB.  According to a “panel” of baseball people, including managers, coaches, scouts, players, and front office executives John Farrell is the best manager in baseball.  The Boston manager is the top manager in baseball according to the Boston based paper?  The journalistic integrity oozing from this story is amazing, but as one former sports executive told me, many of the press in sports are more concerned nowadays with making friends than anything else.  Ya don’t say!?

Either way, when asked where Farrell ranked last season, Nick Cafardo decided not to respond.

This brings me to highly regarded Padres manager Buddy Black. So I want to preface this by saying, Bud Black is a really nice guy.  From a media standpoint, he’s everything you could ask for.  Well spoken, always answers your questions, and goes out of his way to make you feel comfortable.  Despite what people may think, I really like Buddy.  I’m going to questions things that go wrong, but that has nothing to do with Black.  However if you are the manager and miss the playoffs for four, five, six, now seven seasons in a row, I don’t care if you are Casey Stengel, you need to come under fire at some point.

With that said, our own Bud Black, ranked #7 among active managers according to the panel.  This should come as no surprise, Black is well respected in baseball circles.  Unfortunately, Black has yet to meet his potential as the Padres skipper.  It’s rare you see former pitching coaches as managers, but according to Cafardo:

He’s grown from the pitching coach who became a manager to one of the best managers in baseball. Farrell learned a lot from his old Indians teammate. The fact that Black was once a pitching coach is now moot. He’s considered a strong NL tactician.

Strong praise for the former NL manager of the year.  I’m sure Cafardo lays in bed at night falling asleep to soft sounds of Dick Enberg as he watches first hand how Buddy works his craft night after night at Petco National Park.  Don’t we all?!

This list does once again prove that Buddy is thought of as a man of immense talent, and given the right team could win a Championship.  After all, look at what Bruce Bochy was able to achieve in San Francisco.  To Bochy’s credit he did take the Padres to the playoffs in ’05 and ’06 before heading to SF, but two rings later Bochy is a Hall of Fame caliber manager.

Black did inherit a team in 2007 that had made the playoffs the two previous seasons only to lose in game 163 to the Rockies.  In 2008 Black was given the largest payroll in team history and lost 99 games, but he did sweep the Nationals in September which eventually led to the Nats selecting Stephen Strasburg #1 overall in the draft, while the Padres took Donavan Tate at #3 for only $6.25MM.  I’m not bitter.  Yes, yes I am.

In 2010 the Padres stayed relatively healthy and were in the thick of things only to have one of the worse collapses in baseball history.  Ahead by six games on August 28th, the Padres that had launched a “Believe” campaign a month prior fell flat down the stretch.  Black won the NL Manager of the Year for a 90 win campaign.  Not because of getting the Padres to the post-season, but because the National Media thought the Padres were a terrible team, and Black willed them to 90 victories.  Since 2010, Black’s Padres have not been able to break .500 and his career record as the Friars skipper is 540-595.

I think Black could have had a lot of success in Boston, given a veteran AL team, Black could excel. This season he will once again inherit the highest payroll in team history, will this change things?  The previous seven seasons say no, but according to do Uncle Nick in Boston, the Padres could do a lot worse.