The San Diego Padres official announced this morning that outfield prospect Rymer Liriano would be promoted to the big league club from Triple-A El Paso, and in a corresponding move, announced that veteran outfielder Jeff Francoeur would be designated for assignment. Liriano, touted as the Padres #6 prospect, has been a part of the Padres […]Full Article

The San Diego Padres have official announced the trade of utility OF Chris Denorfia to the Seattle Mariners in exchange for RHP Stephen Kohlscheen and Minor League OF Abraham ...Full Article

The carousel that is the San Diego Padres 25-man roster continues at full speed into the end of July as the team has promoted outfielder Jeff Francoeur from Triple-A ...Full Article

For a team that’s poised and ready to sell off its roster (being 10-games under .500 at the time of this writing and just two weeks away from the ...Full Article 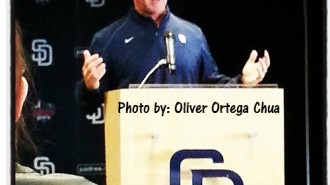