Join the Congregation!|Monday, April 12, 2021
You are here: Home » Glen Miller » Did Hundley Manage to Get Into His Own Head?

Did Hundley Manage to Get Into His Own Head? 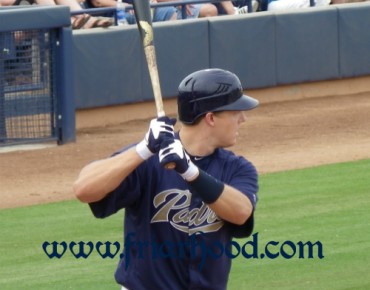 Many Padres fans were disappointed to learn that young catcher Yasmani Grandal had been suspended for the season’s first 50 games because he had tested positive for PED’s. Not only were we upset that Grandal used PED’s in the first place but we were also concerned with who was going to fill in behind the plate and produce some offense from the position in his absence. After posting an OPS of .862 in 192 AB’s in 2012 it looked like the Friars would be in the enviable position of possessing a talented and productive switch-hitting backstop on their roster for the foreseeable future. With Grandal scheduled to miss 50 contests, where was the offense going to come from?

Grandal’s presumed backup, Nick Hundley, was horrible with the bat in 2012. He posted a triple-slash of .157/.219/.245 with an OPS of .464. That was one of the worst offensive performances of any position player in recent memory. Was he going to be able to replace the offense that Grandal produced last year?

For a month it all looked good. Through the end of April Hundley had a .901 OPS and a triple-slash of .329/.357/.544. Then on May 8th, Hundley made some candid comments regarding Grandal to Kevin Acee of the Union Tribune.

“You want to talk about a guy who is unproven and had a good couple months on steroids, go ahead.”

He went on to talk about how he was approaching Grandal’s return from suspension.

“I haven’t given it any thought. I don’t look too far ahead or too far behind,” he said. “I’ve wasted plenty of time in my career and in my life playing the what-if game.”

I don’t have a problem with anything Hundley said. I can understand that as a teammate he would be disappointed in Grandal for using PED’s. I also understand he is a competitor and doesn’t want to just hand his job over to someone else without a fight. But I am concerned that instead of playing baseball moving forward and letting his play do the talking that perhaps he let the situation get into his head.

I have no way of knowing if Grandal’s approaching return put more pressure on Hundley or not. It does sound from his comments that he was irritated that he had to answer questions about playing time when Yasmani did come back. And since then he hasn’t done a very good job of making it easy on Buddy Black to keep penciling his name into the lineup every night.

I got the feeling from Hundley’s later comments that he was only interested in doing his job. Well he hasn’t done that job very well in the last month and I have to wonder if Hundley let the Grandal situation get into his head. Or rather, did Hundley get into his own head?

The Padres will be a better team with both Grandal and Hundley producing like they are each capable of. If they are both hitting the cover off the ball I have a feeling Black will find a way to get them as many at-bats as they can handle. That’s all that the players can control so there is no sense worrying about anything else.

Again, I don’t know that Hundley’s recent struggles have anything to do with Grandal nearing his return. But it’s hard to argue with the timing.