Enough surgeries already; it is time to change pitching 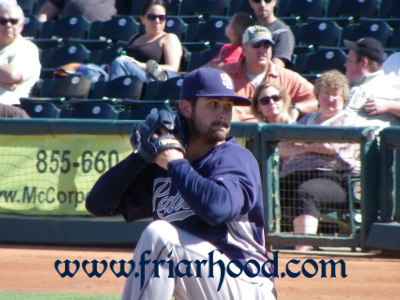 Jose Fernandez is the latest young stud pitcher with a thunderbolt arm to blow out said arm.  According to reports, the Marlins believe the 2013 NL Rookie of the Year will need TJ surgery and be done for 2014 and he probably won’t be himself again into 2015.

Padre fans know the sting of Tommy John surgery all too well.  And with the current staff ace throwing consistent heat there has to at least be some fear of the same thing happening again to this franchise.

I am not a Marlins fan, but Fernandez was fun to watch so this sucks for baseball.  It also brings up a pressing issue.  Maybe baseball is looking at pitching the wrong way.  Chris Singleton on ESPN recently said that all the monitoring of pitchers and limiting of innings isn’t helping prevent injuries and maybe we need to go back to having pitchers work on 3 days rest or throw 125 pitches per night.  This is not the answer.  Perhaps the answer lies in the way we look at pitching.

ESPN and MLB Network love to show highlights of pitchers lighting up the radar gun.

“Hey look at that batter… he’s helpless against that 99 MPH gas!”

The crowd “ooh’s” and “ah’s” and the pitcher looks like a Greek god.   Speed then becomes the most desirable quality in a pitch.  Then young pitchers keep pushing for more speed and the cycle repeats itself.

That’s not pitching.  That is throwing a baseball as hard as you can and hoping the batter can’t square it up.  Because if the batter does, it will be a cannon-shot that will likely be extra bases.  Sure the pitcher tries to locate, but more often than not the pitcher is just relying on his gas.

Maybe baseball needs to try to take the appeal and allure out of throwing harder than you need to throw.  That is not to say that throwing hard is, in and of itself, a negative.  It is obviously better to throw 93 than 83 and throwing hard does not have a direct relationship with arm injuries.  But if you continually drill into a young ball player’s head that “harder is better”, then he will constantly try to dial up the speed.

A pitcher can be effective by giving back just a little velocity and working more on locating well and set-up his pitches.  It takes more courage to not blow it past batters but it may reduce the chances of ending your season on a trainer’s table.  Would you rather throw 89 or 0?

I look at Greg Maddux as the picture of pitching perfection.  I’ll always remember a piece of advice Maddux gave to a reporter during an interview when he was with the Padres.  Maddux relied so much on location, movement and smarts that when asked what pitchers should do when they get into a jam, Maddux was brilliant when he said “try less”.  Instead of gripping the ball, grinding it into the pocket of your glove and hulking up to throw harder, Maddux recommended that pitchers ease up, relax and focus on location rather than speed.  It should be noted that Maddux was still pitching well into his 40’s.  Sandy Koufax and his 102 MPH fastball were not.

It is a mindset thing.  Stop making pitch speed the sexy stat and get excited about them hitting their location.  Stop telling kids to throw harder and, instead, praise them for the movement on pitches.  Emphasize fundamentals, mental toughness and the thought process behind pitching and not if a guy can hit a certain number on a radar gun.

Maybe we can save a few arms along the way.