Join the Congregation!|Sunday, April 11, 2021
You are here: Home » 2015 » #FerrellTakesTheField, Peoria for Awareness 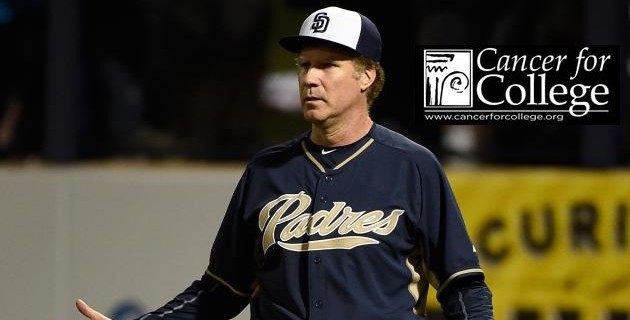 As many of you already know by now, celebrity comedian-turned-actor-turned-professional-baseball-player (for a day, at least) Will Ferrell took the Cactus League by storm yesterday in a whirlwind marathon endeavor to raise cancer awareness. Ferrell made the effort to play on 10 different clubs at 10 different positions – that’s right, he played Pitcher, Catcher, Firstbase, Secondbase, Thirdbase, Shortstop, Left field, Center field, Right field, and Designated Hitter.

Ferrell started Thursday morning playing with the Oakland Athletics wearing #19. He then moved on to the Seattle Mariners, the Anaheim Angels, the Chicago Cubs, the Arizona Diamondbacks, the Cincinnati Reds, the Chicago White Sox, the San Francisco Giants, the Los Angeles Dodgers, and then finally the San Diego Padres.

In a very “you stay classy, San Diego” sort of move, Ferrell wore the #19 for every team he played for – with the exception of the Padres. He wore #20 (Bud Black’s current number, oddly enough) in place of #19 out of obvious respect for the late great Mr. Padre.

Certainly, Ron Burgundy would be proud of Will jogging into the outfield for the Padres. Ferrell joined the Padres and played an inning in right-field – just in time to watch Dodgers prospect Joc Pederson hit a solo-shot over his head off of reliever Jose Valverde. That homerun would prove to be the winning run, but nonetheless Ferrell looked like he was in high spirits – albeit a little bit tired, but still having a good time. Everyone else in the crowd that night seemed to be having a good time – the chanting and cheers seemed relentless with Ferrell on the field.

How lucky can a guy get? Playing every position on 10 different teams – a few historic franchises thrown into the mix – AND he gets his name and number on all of these uniforms?

While I’m sure many agree that his exploits can easily be summed up as living out any true baseball fan’s dream, there was a deeper cause attached to Ferrell’s carousel of baseball calamity – a charity called “Cancer for College.” Indeed, while the fanfare and focus was placed squarely on Ferrell, little attention seemed to be paid to Ferrell’s cause for being out on the field in the first place. Sure, the hashtag “#FerrellTakesTheField” was in full force and a question or two would be thrown out there, but the presence of Ferrell’s charity seemed to be an afterthought to the funny-man’s noble endeavor.

So what is Cancer for College?

Cancer for College is a charitable organization that puts together celebrity events and also sells sunscreen to help raise scholarship funds for cancer survivors seeking a college education. Since its early founding in 1994, Cancer for College has raised over $2,000,000 in scholarship funds for over 1,000 survivors from around the United States and Ferrell has been a huge factor in the success that Cancer for College has seen. Certainly, the celebrity-factor that Ferrell brings to the table should grant the society quite a bit of notoriety and presence. But should you feel interested in looking into the cause a little bit further, feel free to visit their website, and donate or learn more about this noble cause.

While it was certainly exciting to see Ferrell on the field and bring some attention and media presence to the Cactus League (as if it needed any more than it already has?), it’s even better knowing that the stunt was done as a part of a righteous cause – and San Diego was lucky enough to be in the mix.

You stay classy, Will Ferrell. And cheers on the new gig as a San Diego Padre.