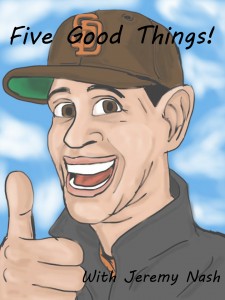 The Padres were able to salvage a series split from a very good team over the weekend after dropping the first two on Thursday and Friday.  The Padres were really just a Huston Street home run given up away from taking the series. They still find themselves three games under .500 entering a three-game stretch hosting St. Louis. Here are five good things I saw over the long series against the Nationals.

I love retro nights of any kind in almost any sport. When it comes to my Padres, I love seeing them wear the brown. Friday’s night was great to watch from home and from what I saw on twitter, really fun from the Park.

The Padres wore their 1984 home uniforms (beautiful) and ran a lot of old 80’s movie trailers featuring players and coaches in the staring roles including Everth Cabrera & Dave Roberts as Daniel-san and Mr. Miyagi in Karate Kid (brilliant).

But the best thing was the three straight two out singles by Chase Headley, Yonder Alonso and Kyle Blanks that tied the game in the ninth, sending us to bonus baseball. The Padres however did lose after leaving runners on first and third with one out in the 10th, down 6-5 after a Street gave up another home run, this time in a non-save situation.

Cashner was brilliant for the second straight start, allowing only thee runs on seven hit’s pitching within an out of seven complete innings. He struck out six and walked only one batter, shutting down Washington’s potent offense in Sunday’s blowout win.

Stults pitched even better Saturday than Cashner did on Sunday, going eight full innings of one-run ball. He fanned five while walking two and allowing just four hits on 89 pitches, helping the Padres wrap up this win in just two hours and one minute.

The Padres first baseman had a great series at the plate as well as the field. He started all games but Fridays, getting six hits in 13 at-bats, including a crucial pinch-hit Friday to keep a game-tying rally alive.

Yonder also knocked in three base runners and hit two home runs, tying the team lead with six. He also made several nice plays in the field, most notably a nice snag on a grounder that deflected off the pitcher Saturday, where he looked back the runner at third, tagged his bag, then ran across the field and tagged out one of the two runners stuck occupying third for a very unconventional, yet heads up double-play.

ECab makes the list again with contributions all over the diamond. You want gold glove caliber plays, he made a few this weekend. Want a game winning RBI? He got that too. He also stole a base in each game, including three on Sunday, totaling six for the series and bringing his National League leading total to 18.

So there were five good things that occurred hosting Washington and there could have been many more, notably Will Venable, Jedd Gyorko and Kyle Blanks at the plate. We begin three more against the NL Central division leading Cardinals on Monday. I see out boys winning two, finding themselves knocking on .500’s door before a very big series in Arizona on Friday.