Reports surfaced late Tuesday night that Padres infielder/utilityman Logan Forsythe is being sent to the Tampa Bay Rays in a possible four-player deal involving pitcher Alex Torres and two unknown prospects or players to be named later. The news came via Chris Cotillo on Twitter.

Torres, who was signed as an amateur free agent with the Anaheim Angels back in 2005, made his major league debut back in 2011 with the Tampa Bay Rays. Torres, 26 years old, has played in 43 games over his major league career. The southpaw pitcher has a combined 5-3 record and 1.91 ERA over his career, posting 62 strikeouts over 66.0 innings of playing time.

Torres had a strong presence in 2013, pitching for a 4-2 record with a 1.71 ERA in 39 relief appearances for the Rays. Torres was traded to the Rays organization back in 2009 in exchange for pitcher Scott Kazmir (currently with the Oakland Athletics).

The deal has not yet finalized, but the consensus is that Forsythe is going to be a Tampa Bay Ray. The two prospects that will be exchanged between the San Diego and Tampa Bay clubs have not been formally decided, but this article will be updated as the news develops. 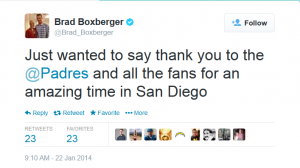 **UPDATE 1-21-2014 @ 1050** The Padres have also included IF Maxx Tissenbaum in the trade. Tissenbaum spent parts of 2 seasons with the Single-A Euguene Emeralds and Single-A Fort Wayne Tincaps, batting .282 with 78 RBI. The Padres close out the deal, sending 5 players to Tampa Bay in exchange for 2 pitchers.