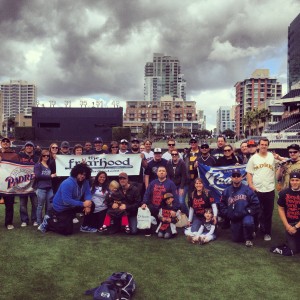 FanFest came and went, but I’d wager to say that we made the most of the event.  Big thanks to everyone that was representing the new 98 shirts at FanFest, they looked awesome.  I think our guest of honor Antonio Garay stole the show, hopefully everyone had a chance to say hello and snap a picture with him.

At the end of the day I could only remember bits and pieces of how the event went, guess that’s a good thing?  For a full recap on FanFest, Richard Dorsha did a great job of recapping the event.

The main focus of Friarhood since its inception was to be an active community and engage other Padres fans.  In an effort to do that, we had a scavenger hunt during FanFest.  Plenty entered, few won.

Thanks to everyone that participated, our goal was to make Fanfest just a bit more fun.  If you are a winner, please send an email to steveadler AT friarhood (dot) com and we can arrange pick up.