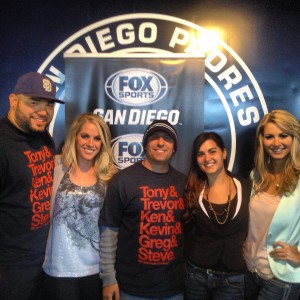 Fox Sports San Diego has been busy lately and today is probably going to be the biggest splash.  FSSD has announced three new members of the team.  As part of the 78% of the county that doesn’t subscribe to Time Warner (because I’m not a Dodger lover), I enjoy the TV side of things.  That still doesn’t change my stance on bringing back Matt Vasgersian though (SANTA MARIA!).  With that said, meet the new ladies of Fox Sports San Diego.

Full Disclosure – Hails from Indiana, attended Mizzu-Columbia and works for the Thunder.

Full Disclosure: Comes from the MMA world and could probably kick your ass.