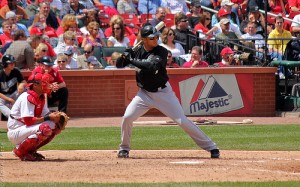 The Marlins are listening to offers for Giancarlo Stanton and it’s time for the Padres to stand up.

In a recent piece right here on Friarhood, Steve Adler made the case for the Friars to sign the top FA position player on the market at the time, OF Josh Hamilton. He pointed out that the Padres have the cheddar to fit an expected annual salary in excess of $20MM within the confines of their budget (agree!), argues that they would have benefitted from Hamilton’s offensive production (who wouldn’t?), and while sticking with player development as the primary method of roster construction is the right move for San Diego adding a player of Hamilton’s caliber would have created much needed buzz among the Friar faithful (undoubtedly!). Steve also talks about a poll conducted via twitter in which he asked Padres fans who the last free agent or trade acquisition made by the club that made them say, “wow.” The overwhelming answer was the trade for RHP Kevin Brown prior to the magical 1998 season. It seems the Padres are long overdue to make an impact move.

Of course the suggestion to sign Hamilton was rendered moot when the former Ranger OF agreed to a five-year, $125MM contract to jump ship to the division rival Angels. With Hamilton no longer available the Padres aren’t necessarily without other options should they decide to make a blockbuster acquisition either this offseason or perhaps during the 2013 season. In fact, given the massive sell-off going on in Miami, the Padres need to make every effort to trade for star OF Giancarlo Stanton as soon as the Marlins make him available. It’s about time for the Friars to go big or go home.

Yeah, I know, the Marlins insist a deal is highly unlikely, but it is clear the player has no intention of remaining in Miami any longer than he must at this point. Perhaps he’ll soften that stance as time goes on but if he remains a disgruntled player the Marlins will almost have to entertain moving him while his value is at its highest. When that happens, and I believe it will, the Padres need to be aggressive in their pursuit.

In the ESPN.com “Rumor Central” section, Jason Churchill discusses that possibility and references the Padres, with their plethora of young talent in the system, as a possible destination for the star OF. In a separate article on ESPN.com, former Reds and Nationals GM Jim Bowden also wrote about the Stanton situation in a post titled, “Getting great players out of bad situations.” He says, “the prudent move would be to trade him and maximize the return for a player of Stanton’s caliber.” Clearly I am not the only one who believes the Marlins will have little choice but to move the OF.

I don’t believe I have to articulate just how good Stanton is. He has already hit 97 HR in fewer than 1,500 career plate appearances and just turned 23 last month. He’s improved his batting average, OBP and slugging % in each of his three ML seasons. Stanton also plays a very good RF according to the advanced defensive metrics (career 8.7 UZR/150). What’s not to like about Stanton as a player?

Now there are two things to consider when talking about a move of this magnitude. One is how long can the Padres realistically expect to keep him and the other is what would the Friars have to give up to get Stanton. Let’s address that.

First, Stanton is under team control through 2016 so if acquired sometime during the 2013 season the Padres would own his rights for 3+ seasons at least. The club could also use the team-friendly long-term extensions signed by Ryan Braun (Brewers), Troy Tulowitzki (Rockies) and Evan Longoria (Rays) as a model for trying to lock up Stanton. Each of those players signed an extension in their pre-arbitration years. Then long before the first extension expired they agreed to another ultimately tying the player to the club for a decade or more.

For example; Longoria, in the midst of an eight-year, $45MM contract he signed literally days after debuting in the big leagues, agreed to add another five years and $105MM to that deal. That means he is tied to the Rays for 15 seasons at a total cost of just $150MM. Even though the later years call for salaries around $20MM per I think the Friars could live with that type of commitment for a legitimate superstar player. Considering how the deal is structured with lower salaries early, higher salaries later and the Padres plan of increasing payroll in stages this model would seem to fit their long-term plan perfectly.

Stanton is represented by the Wasserman Media Group and they have a track record of obtaining these types of long-term contract extensions for players before they are eligible for UFA. Wasserman represents Starlin Castro who just agreed to a seven-year, $60MM extension ahead of his first trip through arbitration. Other Wasserman clients, Hanley Ramirez and Jason Kendall, also received large extensions ahead of free agency from small-market Florida/Miami and Pittsburgh respectively. While Scott Boras almost always takes his players to free agency to secure the best deal possible, it seems at least possible to get  team-friendlier long-term deals done with Wasserman clients.

Now, every team in baseball would love to have Stanton. That means he is going to be very costly in terms of the talent going to Miami to make a deal for Stanton. The Padres do have an advantage over many of the other potential suitors as they boast one of the best collections of prospects in baseball according to many evaluators.

In my view the package of players Miami would insist on would have to include five-tool OF prospect Rymer Liriano. Liriano might be the position player prospect with the highest ceiling the Padres have developed since the days of Benito Santiago, Sandy Alomar Jr. and Robby Alomar. Liriano would be the Marlins long-term answer in RF replacing Stanton.

Among the other players the Marlins would likely ask about are: C Austin Hedges (no), LHP Max Fried (hesitant but the Friars have pitching depth in the system, so OK), and 3B Jedd Gyorko (would rather they take Forsythe or someone else but somehow don’t think so).

If the cost to get Stanton starts with Liriano, Fried and Gyorko then I make that move all day, any day. As much as the Padres might like those players they are still just prospects who have proven nothing at the big league level. They don’t come here with any guarantee of success at this level.

Stanton on the other hand is a proven commodity and one who would make the Padres offense a formidable one. Imagine a lineup with Headley, Stanton, Alonso, Quentin and Grandal hitting in the heart of the order. That sounds like the offense of a playoff team to me.

Yeah, I know, just a few days ago I wrote an article praising the Friars for choosing to keep the platoon of Venable and Denorfia in RF as opposed to adding a bat either via free agency or by trade. Yet here I am advocating the Padres make a huge blockbuster of a deal for Stanton. Am I confused? No, believe it or not I am relatively sane. The thing is that Stanton isn’t available right now and may not be available for a while. Miami is trying to maintain some credibility with their fans and with the commissioner’s office and dealing Stanton for prospects would destroy any they have with either.

At the outset of the offseason the Friars made the correct choice to stick with the platoon rather than chase a more expensive option. However the Padres should already be considering just how much they would be willing to give up to acquire Stanton from Miami when he comes available. He’s the type of franchise player the Friars could build multiple playoff teams around and the type of player San Diego hasn’t had in quite a while.