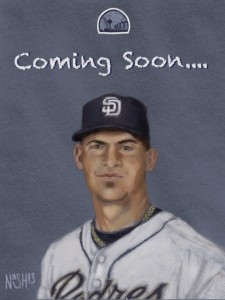 The Padres are opting to pickup rookie catcher Yasmani Grandal and have him return to the big league club Tuesday and send John Baker down to Triple-A Tucson, according to the Padres own Corey Brock. Grandal became eligible to return after Monday’s loss to the Mariners as the young catcher was serving a 50-game suspension for violating MLB’s drug-abuse policy.
Grandal has been with Triple-A Tucson since mid-May in preparation for his return. In 9 games with the T-Pads, Grandal batted .306 with 2 RBI and 3 doubles. Last season in his Major League debut, Grandal batted .297 with 8 home runs in 60 games.
John Baker, who will be taking Grandal’s place with the AAA Club, struggled this season sporting a .150 batting average with 2 RBI in 16 games. Grandal could potentially be in the lineup as soon as tomorrow evening.