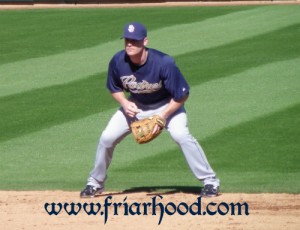 The Padres made a handful of roster moves today as it was announced that Rookie Infielder Jedd Gyorko will be headed to the 15-day Disabled List after sustaining a groin injury during Sunday’s 10-inning loss to the Rockies, according to Padres announcer Bob Scanlan.

Gyorko felt his groin tighten up and strain when running between first and second base Sunday, and as such the team is erring on the side of caution and placing him on the DL. Gyorko was having a banner year in his first major league season, leading all MLB rookies in hits and doubles. Gyorko’s batting average was .284 with 8 Homeruns and 25 RBI before being placed on the DL.

Replacing Gyorko on the infield will be infielder Logan Forsythe who was activated off of the 60-Day DL today. Forsythe has been down with a foot injury (plantar fasciitis – essentially a floating bone chip in his heel) that kept him off the playing field since Spring Training.

Forsythe hasn’t appeared in a big league game since October of last year, but he has been rehabbing with Triple-A Tucson since mid-May. Last season, Forsythe batted .273 with 6 Homeruns and 26 RBI playing in 91 games with the club. In eight games with the Triple-A Tucson Padres during his rehab stint, Forsythe has been batting .360 with 2 homeruns. Forsythe will be in the starting lineup for Monday night’s game against the Atlanta Braves.

With Gyorko hitting the disabled list, the Padres needed to make room on the 40-man roster for Forsythe’s return. As such, the corresponding move that the club chose to go with was to designate catcher John Baker for assignment. Baker joined the Padres last season and has filled in as the back-up catcher to both Nick Hundley and Yasmani Grandal over the last two seasons.

Baker was recently sent down to Triple-A Tucson to make room for Grandal, and struggled at the big league level batting only .150 with 2 RBI in sixteen games. Baker did not fare much better at the Triple-A level, batting .231 with 1 RBI in four games. Baker is a lifetime .258/.342/.364 hitter who was due to become a free agent at the end of the 2014 season.