In Defense of Bud Black 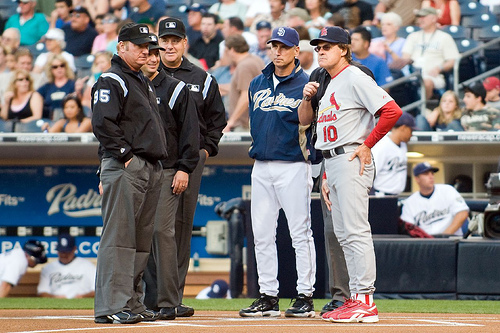 You are not wrong.  I am not right.  However, before you succumb to the notion that you dislike the Padres’ current manager, please consider the possibility that Bud Black is good at his job.

Whatever your opinion is of Black, you cannot be proven incorrect.  The cumulative effect a manager has on a baseball team is next-to-impossible to quantify.  Therefore, fans are going to have opinions of the current Padres skipper based on anecdotal evidence.  You’ve heard it before, it usually goes something like this: “man, why did Buddy (use that pinch hitter/leave his starter in/call for a bunt) there?  I can’t stand him!  He sucks!”

One metric for measuring managerial success is something called “wins above expectancy” (with thanks to Beyond the Box Score).  This takes a baseball team’s real win-loss record and compares it to its Pythagorean record, which is the hypothetical record a team should have based on the number of runs surrendered and runs scored.  This is not anywhere close to an exact measure, but it is, at the very least, a place to start.

So, Buddy has cost the Padres 3 games, right?  First, that is not bad.  Buddy ranks above the likes of Tommy Lasorda and Connie Mack for WAE.  However, diving a little deeper:  what about a WAR type statistic for managers?  What is Buddy worth when compared to what an “average” manager would be?   To compute this, you would need to calculate the combined player’s WAR numbers and compare it to the actual W-L for the team.  Again, Adam Darowski has done the footwork for us, you can check out the list here: http://darowski.com/hall-of-wwar/expectancy/

When factoring in the quality of PLAYERS Buddy has had to work with over the years, he actually comes out to a +15 WAE/war.  Therefore, to combine the WAE and the WAE/war numbers:, Buddy is a +12, which puts him ahead of Jack McKeon, Ozzie Guillen, Branch Rickey and Larry Bowa (just to name a few).

What does all this mean?  Probably not a whole lot to you, either way.  If you dislike Buddy, this isn’t going to dissuade you from feeling he is a troll.  If you already like Buddy, this doesn’t elevate your view.  This is just some context for what else you need to consider: Buddy is praised by some really smart people.

This is just a sample; there are others.  Anyone with a computer and a wi-fi signal can find the exact perfect match-up at any given time.  This doesn’t make a manager.  I submit that Buddy is an asset to the Padres because of his ability to get more out of players than maybe someone else could have.  This team has never quit on its manager despite being eliminated from contention painfully early on more than one occasion (the team has especially dramatic rallies at the end of 2009, 2012 and so far in 2013).  Other teams turn on their managers; the Padres do not.

Buddy is also a teacher, especially for his pitchers.  The Padres, let’s face it, will not employ too many aces in their late 20’s/early 30’s.  They have kids or veterans.  The old guys don’t need more than tweaking their mechanics.  When it comes to developing and teaching a young pitcher, there are few managers in baseball as good as the former left-hander.  Consider Jake Peavy winning his Cy Young the same year Buddy came on board. Other young arms (Latos, Gregerson, Frieri, Richard, Luebke, etc) benefitted from being here.  I also want to mention that Mike Adams had the best seasons of his career with Buddy as his skipper.  The argument can be made that Petco Park was a factor, and that is true.. but it was not the only factor.

And finally, fans should maybe ask themselves:  what exactly is the value of hating on the manager?  He just signed an extension, so he’s not going anywhere.  Grinding one’s teeth every chance one gets leaves one with little more than worn-down teeth.  Disagreeing with a move or two doesn’t really take into account the fifty moves he made that no one noticed and worked out really well.  And, ultimately, fans need to ask themselves: who else would you (realistically) want to hire in his place?

Buddy will make moves that fans don’t like.  Fine.  But the value of a manager comes from numerous places other than the field.  The value is in the clubhouse, during bullpen sessions between starts and on chartered flights.  Consider: new ownership took over in 2012 and had every chance to clean house this off-season and mold the Padres the way they wanted.  They chose not to find someone else.  Someone knows something about Buddy that the fans don’t.  I trust the right guy is leading this team.