Join the Congregation!|Friday, April 16, 2021
You are here: Home » Padres Fan Blogs » It’s About Time: The All-Star Game at Petco

It’s About Time: The All-Star Game at Petco 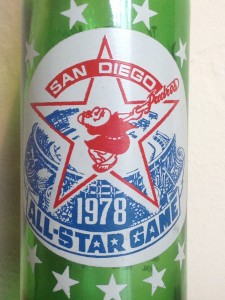 7-up bottle from the 1978 World Series in San Diego

The Padres are asking to host an All-Star Game.

As a Padre fan I’d like to say: what the heck too so long?  And don’t tell me that we got the World Baseball Classic instead, that is not a fair trade.

I can’t say I remember the 1978 Mid-Summer Classic (I was busy being born that month).  I do remember the buzz created by the game in 1992.  The team was pretty good that year and it was still in the division race at that point.  The Padres also sent 5 players to the game, including 3 starters (still a franchise record for highest totals in both categories).  I can’t say the same thing will happen whenever the game comes back, but the point is: it will be special.

I’m sure the tourism people will rant and rave about the influx of tourists for the game, and that’s fine.  But I don’t care.  What matters is that San Diego will be the center of the baseball universe for 2 days.  Petco Park will shine like the jewel it is.  The Gaslamp will come alive with banners and posters promoting the game.  It will be a once-in-a-life-time event on par with few other events.  Comic con is fine, but it’s every year.  The All-Star game has been 21 years and counting.

Now, it’s not the Super Bowl and I’m not sure it’s even the U.S. Open in 2004.  It will, however, create an electricity from the time of the announcement and it will build until the game.  I know the All-Star Game itself is less than compelling.  The idea here is all other stuff that goes with the game, that will give all of us a sense of excitement that can not be easily duplicated.

So, bring the game here and get ready to smile.