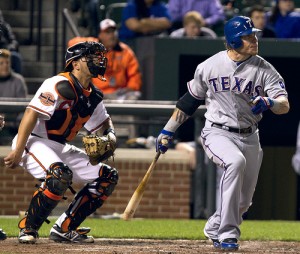 Josh Hamilton would look great in a Padres uniform… in 2013.  I ask before you react, at least hear me out on this one.

I do believe that Padres fans are the most fiscally responsible fans in baseball.  After years of being beat down by previous regimes the fans have been trained to feel two things:

No screaming from the mountain tops that missing the playoffs is unacceptable or putting heat on the front office to bring in talent.  In San Diego, people don’t protest the team, they don’t wear bags, they don’t burn jerseys.  They just do other things, like go to the Zoo, or Sea World, or the beach, or pub crawls.  The casual fan has no problem doing other activities and taking a wait and see approach.

So, I asked myself… If money was no object in terms of paying for a free agent in this class, what would stop you from signing Hamilton to a 4-year deal?  Outside of being on the wrong side of 30, I would be concerned about his make-up.  It’s always a great story when the guy bounces back, but not so much if he slips up and it’s on your dime.

Last week I asked on twitter, what was the last Padres free-agent signing/player acquired via trade that really excited you.  The majority of the answers were (drum roll, please) Kevin Brown.   1998 the Padres traded for Kevin Brown, not the best club-house guy, not a great teammate, but one helluva pitcher.  Other non-sarcastic responses were Brian Giles, and Milton Bradley.  Milton Bradley?  Bradley ended up having one of the most successful seasons by a Padre in Petco Park before good ole’ Buddy Black body slammed him on the ground and ended his season (and the Padres playoff hopes).

Milton Bradley, problem child, hot head, impossible to control, yet regarded as a good teammate in San Diego and was very productive.  After a few emails and tweets during my radio show on Saturday, I started to talk myself into the fact that Josh Hamilton’s personal issues shouldn’t be as big a concern as I am making them out to be.  For all the criticism I give Buddy Black, the guy runs a good clubhouse and knows how to manage the emotions of veterans.  Worst case scenario, I handcuff Hamilton to Chase Headley.  Problem solved.  I shouldn’t have to say it, but I will, adding proper language to the contract to protect the club is to be expected with Hamilton.

Let’s get down to brass tacks, how much?  The Rangers reportedly have offered three years at $75M, decent money for a guy that has driven in 322 runs over the past three seasons.  The Rangers are trying to offer more per year and less years.  Hamilton wants a fourth year, so it would be safe to assume a four year deal in the range of $85-90M would be reasonable.  I realize that Padres fans are not used to seeing those numbers for a team payroll, but for one player?  Keep in mind that the Giants starting rotation was paid more than the Padres roster in 2012.

My point?  The Padres are not expected to reach the levels of the Yankees, the Phillies, or the Red Sox in terms of payroll, but asking the team to land in the middle in terms of salary (Cubs $88M in 2012) should be expected.

The. Padres. Have. Money.

The Padres had a salary of $55M (according to our friends at Cot’s contracts) in 2012.  Hudson, Bartlett, Stauffer,  and Moseley come off the books in 2013, that’s $16.212M for those of you keeping score at home.  Some quick math tells me that including the off-season signings (Blanks, Marquis) plus the projected arbitration numbers, the Padres 25-man will be approximately $62M for 2013.

Personally I don’t want to hear how to payroll can evolve into the $80M dollar range, it will grow as the young players grow, blah, blah, blah.  The Padres could sign Hamilton and “bridge the gap”.  In four years his contract would expire, and that is when the team would start paying sizable amounts for players such as Alonzo, Grandal, Wieland, Kelly, and such.  Remember… The Padres can sign Hamilton if they wanted to, they have the money.

I try to error on the side of rational judgment most of the time, but this fan base needs a shot in the arm.  It’s been 15 years since the Padres did something fans consider significant in terms of player movement (Kevin Brown).

The die-hard fan is going to support this team, but the re-signing of Jason Marquis and the trade for Tyson Ross is over-shadowed by Yasmani Grandal failing a drug test and Andrew Casher going sushi chef on himself.  If the “new ownership” wants to send a message to baseball fans in San Diego (and I strongly suggest they do) that 4th place isn’t good enough, they shouldn’t be afraid to over-spend a little and bring in the big name with the huge bat.  Consider it, buying some goodwill.

After all… They have the money.