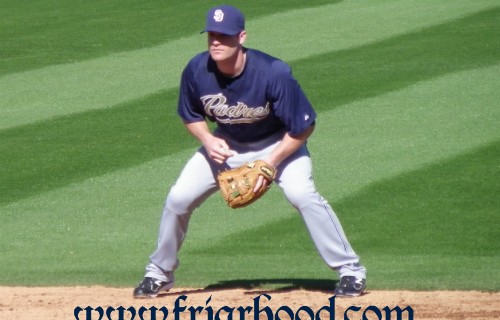 Well Padres fans, the news seems to be getting worse lately. Logan was pulled after just three innings of work in the field in today’s game against the Giants. Both Corey Brock (@FollowThePadres) and Bill Center (@UTPadres) tweeted that Logan Forsythe had “setbacks” and was “in a lot of pain”.  Bill Center also goes on to tweet Bud Black’s response to Forsythe, “The pain got worse the more he was on it. Looks like we are heading in that direction (disabled list).”

Logan only played eight games this spring training batting .270/.343/.390 before he developed his plantar fasciitis on March 9th.

With the start of the 2013 baseball season less than a week away, the Padres need to narrow down who will be replacing both Chase Headley and Logan Forsythe. Chase Headley, you will recall, has a fracture in his thumb and will start this season on the disabled list. As we wrote about earlier, Josh Byrnes has hinted about a plan at third base that would involve a platoon split of Jedd Gyorko, Cody Ransom, and Alexi Amarista between second and third base. Cody Ransom, who signed with the Padres as a free agent on December 21, is batting .250/.286/.575 in 42 PA this spring. Another third baseman candidate is James Darnell but he is still currently out battling an oblique injury and hasn’t played since March 11. He is also likely to start on disabled list.