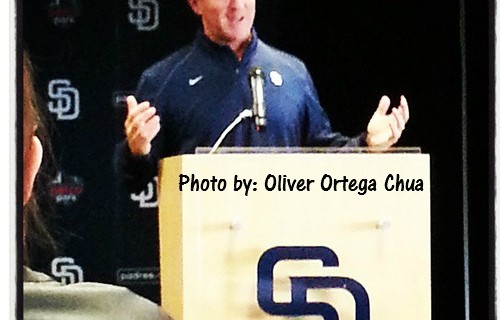 The Padres on Tuesday received some bad news regarding talented, not-so-young-anymore, LH pitcher Cory Luebke, when it was revealed the hurler was going to undergo a second reconstructive surgery on his left elbow. Luebke already sat out all of 2013 and most of 2012 as a result of the first procedure and will now be forced to sit out 2014 and possibly well into 2015 as well. It’s a bad break but not crushing as the Friars have a good deal of rotation depth but it’s yet another setback to the strategy enacted by GM Josh Byrnes when he took over as GM from Jed Hoyer in October of 2011.

When Byrnes ascended to the role following the departure of Hoyer, one of his first priorities was locking up several key young players to long-term deals buying out arbitration seasons and a few potentially expensive free agent years in the process. This strategy was originally perfected by another smaller market club back in the 1990’s with Cleveland locking up the core of their playoff teams to what eventually became below-market contracts. There’s always risk associated committing term and dollars to players whose earning potential is suppressed during their pre-arbitration years and who have yet to prove themselves as big leaguers for more than a season or two. However the benefit of purchasing prime years at a cost ordinarily less than the player would have warranted through the arbitration process and as a free agent (assuming the club bought out a year or two of free agency as is often the case with these extensions) easily outweighs the risk.

Within months of taking charge, Byrnes had extended the deals of three young Friars: Nick Hundley, Cameron Maybin and Luebke. Each had shown the ability to be at least solid big league regulars and in the cases of Maybin and Luebke, perhaps even more. The commitments totaled $46MM and 12 years.

Maybin was coming off an excellent season producing league average offense and elite defense at a crucial position. He recorded a triple-slash line of .264/.323/.393, hit 9 HR and stole 40 bases contributing 4.2 WAR in 2011. After signing his extension his offensive numbers tailed off but he was still worth 2.3 WAR buoyed by his defensive skills and baserunning ability. Unfortunately Maybin, battling knee and wrist injuries, saw his performance fall off a cliff last season and was below replacement-level posting a WAR of -0.6.

Luebke flashed top-of-the-rotation stuff in 2011, finishing with a K-rate of 9.92/9 and posting an ERA of 3.29 in his first extended use as a big league starter. The following season he started off well, though his K-rate dropped to 6.68/9, and had an ERA of 2.61. Then the elbow problems flared up and he hasn’t pitched since.

The net ROI for the Friars on these three extensions: $11MM has been paid out and the Padres have received a total of 3.7WAR. The average cost per WAR has been about $3MM which seems like a bargain relative to the roughly $6MM it costs to purchase 1 WAR on the open market. However, the expectation was that the Padres were signing guys who were on the upswing of their developmental curves, or at the least would perform as well as they did prior to signing their extensions. The team agreed to pay them more than what they would likely have earned had the club simply let the process play out through the pre-arb years with the idea that they would save on the back ends of the contracts. Ideally the Padres would have received better than 1 WAR per $1MM on their investment during the early portions of these extensions. That hasn’t been the case with Maybin, Hundley and Luebke.

It was a worthwhile risk for Byrnes to take but either the organization misjudged the potential of the players extended or, as is more likely, the team was victimized by bad luck with regards to injuries.

A healthy Maybin is still a valuable contributor even when he isn’t swinging the bat particularly well as we saw in 2012. Unfortunately, the knee and wrist problems kept him off the field and resulted in him being one of the worst hitters in baseball last year.

If Hundley can at least be what he was last year, a competent receiver with some pop in his bat, his deal will still look pretty good by the end of the contract. Injuries did cut into his performance in 2012 suggesting he is more likely the player we saw in 2013 than the one who hit worse than I could have in 2012.

With Luebke it’s going to be tougher. Assuming he is ready to take the field in 2015, he will have missed almost three full seasons of action. The Friars own a couple of options on his contract that could be exercised if he shows he can be healthy and effective. But at this point that is a big if.

For whatever reason, the Padres have experienced a lot of bad luck with their young pitchers suffering a multitude of elbow issues. Luebke, Joe Weiland and Casey Kelly have all gone down to injury. Luebke’s latest elbow problem won’t affect the Friars on the field this season but it may cause Josh Byrnes to be more careful when extending his young players.