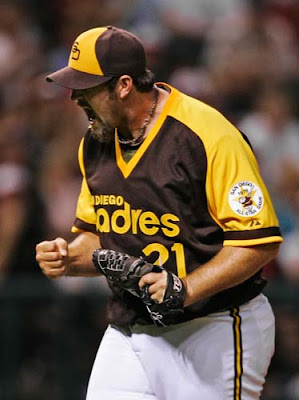 Outside of being the leader of the best bullpen in baseball, Heath Bell has been putting up staggering numbers as the closer for the best team in the Nation League. He leads the league in saves and is the best closer in the National League at this time.  So, how is Bell on the outside looking in?  I realize two things about the Major League All Star game.

1.  Every team has to have a representative

As a Padres fan, I know that all too well.  Although this roster that NL Manager Charlie Manuel put together draws comparisions to a college football coach delegating his coaches poll responsibilites.

2.  Some deserving players will be left out.

This is the way it goes, even with an expanded roster.  I do feel that some of these picks did not make a lot of sense, case in point.  If you pass over Andrew McCutchen and select an 8th inning guy for Evan Meek, then why do you have Arthur Rhodes on the team?  Nothing like a lefty specialist in an all star game I suppose. Not offense to guys like Martin Prado and Arthur Rhodes but players such as Mat Latos, Heath Bell, and Joey Votto are far more deserving.

Posted in:  2010 Season
The Friarhood Sponsors