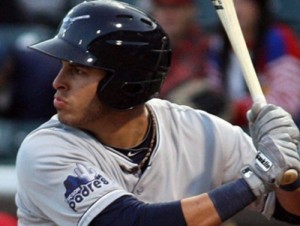 San Diego Padres first-base prospect Matt Clark has elected to play for the Chunichi Dragons in 2013.  Clark broke the news himself via twitter:

Starting a new chapter in my life. Now officially going to play for @dragonsofficial aka Chunichi Dragons. #japan

Selected in the 12th round of the 2008 draft, Matt Clark has hit for power at every level, averaging 24 homeruns and 90 RBI over his last four full seasons.  When asked about his decision to play in Japan, Clark said,

I’m just excited to get a chance to explore the opportunities baseball has blessed me with.  Whether it be here or in Japan.  Should work out well for me and help me continue my career no matter where I end up.

With the losses of Nate Freiman (Rule V draft) and Matt Clark, the Padres should look to have power hitting C/1B/OF Cody Decker return to 1B in 2013.  Kyle Blanks and James Darnell will be returning from injury as well and are both capable of playing the position.