Join the Congregation!|Thursday, April 22, 2021
You are here: Home » 2015 » Middlebrooks Optioned to El Paso, Almonte Called Up 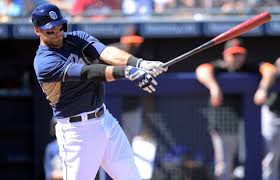 As of Wednesday, July 22 at 10:00 am, San Diego Padres third baseman/shortstop Will Middlebrooks has been optioned to Triple-A El Paso.

Middlebrooks, who was acquired from the Boston Red Sox in the offseason, has appeared in 83 games with the Padres up to this point, and has posted a .212 average with a .241 on-base percentage.

As of recent times, Middlebrooks has been splitting duties at third base with Yangervis Solarte, who was sent to San Diego from the Yankees in the Chase Headley trade late last season.

The move is surprising for some, as Middlebrooks has shown his veteran defensive abilities throughout the year, but has not started a game in quite some time, only appearing as a pinch hitter, and has displayed below-average offensive numbers this year. As the Padres have seen struggles with their middle infield this year, the move may give Middlebrooks extra time to possibly adjust to playing shortstop; shortstop has been quite the Achilles heel for San Diego up to this point.

The move will give outfielder Abraham Almonte another opportunity with the big league club, replacing Middlebrooks on the active roster.

Almonte has already had 43 major league at-bats and four RBI’s to his name this year. In 61 at-bats with Triple-A El Paso, outfielder Almonte has recorded 67 hits, 43 runs, and 35 RBI’s, accumulating in a .275 season average. His last major league appearance with San Diego came June 7 in Cincinnati.

Almonte will in fact be available in today’s series finale vs. San Francisco at 12:40 pm, and will hit in the lead-off spot, playing left field.