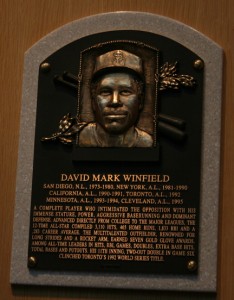 Don’t blame the writers for not voting for a bunch of cheats. Blame Bud Selig for letting it happen.

With a ballot that looked like an All-MLB first team from the mid-90s, the candidates put up a goose egg (75.0% or higher needed for induction).  Today, no player was elected in the MLB Hall of Fame.  As a Padres fan we are sitting in a holding pattern until Trevor Hoffman is eligible, but for those that remember the “Crime Dog”, you did have some rooting interest.  On a ballot that included first-time eligible players such as:

Fred McGriff was traded to the Padres before the 1991 season and quickly became a fan favorite.  If it wasn’t for the fire sale, who knows what McGriff would have become in San Diego.  Regardless, the guy could mash and he did so in either league, on any team, in any park.

Back in the day (before the steroid era) those were damn good numbers.  As I mentioned, Padres fans don’t have a lot of rooting interest in the Hall of Fame vote, but we do have a few guys that played in San Diego briefly and/or grew up in town.  Below you can see how those players fared.

The 2014 list of first-time eligible players will only make it harder for the players that did not get in this year.  Take a look.

So, the question I have for you is… Where do you stand on the matter of voting for guys that cheated?  What players would you have voted for if you had a ballot or would you have submitted a blank ballot as some voters did?