There may not be any big trades or signings by the San Diego Padres on the fourth and last day of the Winter Meetings in Nashville, but there still has been plenty of action. 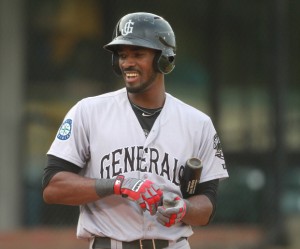 The Rule 5 Draft took place this morning and the Padres made two selections in the Major-League portion, right-handed pitchers Josh Martin from the Cleveland Indians and Blake Smith from the Chicago White Sox. They were not done there however as they later received a couple other Rule 5 players via trades, OF Jabari Blash (left) from the Oakland Athletics and RHP Luis Perdomo  (above) from the Colorado Rockies. It turns out that Blash is the player-to-be-named-later in the Yonder Alonso-Drew Pomeranz trade, and as for Perdomo, the Padres will either send cash or a PTBNL back to Colorado. Between the four players acquired, Blash and Perdomo probably have the most upside, but don’t be surprised if Martin and Smith make the Padres’ roster either. Both have good minor-leagues stats, including high strike-out rates and the Padres picked them hoping their numbers will translate to the major-league level. I sure hope, but we’ll have to see.

In other Padres news, according to Matt Eddy of BaseballAmerica.com (Twitter links), the team signed RHP Phil Humber and “hard-throwing” LHP Ryan Buchter to minor-league deals. They also re-signed LHP Frank Garces to a minor-league contract.