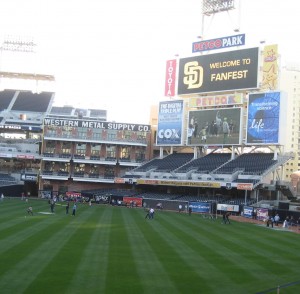 The Padres have announced that FanFest will be Saturday, February 9th, 2013 at Petco Park.  Official press release statement below:

The Padres also announced the Annual Awards Dinner will be the evening before (February 8th) at the Hall of Champions in Balboa Park.  Ages ago the Padres invited myself and a few other gentlemen with Padres fan sites to this event.  Not sure what happened exactly, but we haven’t been invited back since (cough cough).  Here is the information about the banquet:

On Friday, February 8, the club’s annual awards dinner will return to the San Diego Hall of Champions in Balboa Park, where it was previously held before moving to Petco Park in 2012. During the event, which will include a reception and dinner, Padres players, coaches, broadcasters and members of the leadership team will help kick off the 2013 season and honor the Padres’ 2012 Major League and minor league award winners.

Individual tickets and tables for the dinner are on sale now, with all proceeds benefiting the San Diego Hall of Champions’ Jr. Reviving Baseball in Inner Cities (RBI) program in San Diego. For more information, or to purchase tickets, please contact the Padres community relations department via email at community@padres.com or by phone at 619.795.5274. 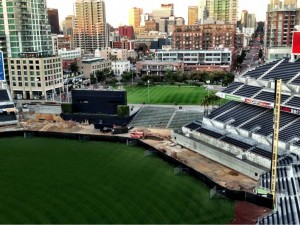 Last year we were able to broadcast Friarhood Radio live on XTRA Sports 1360 (with special co-host Cody Decker) from the Tilted Kilt during FanFest.  Chances are good that we will once again broadcast live during the event from a nearby location (who knows, maybe we can even sneak in and grab a hot dog this year).

Time to get social… The Padres haven’t stated what is going to happen at FanFest yet, but personally, I look forward to the garage sale and I’m looking forward to getting a first hand look at the new dimensions.

In the comments below, post your favorite and not so favorite parts of the event.  What things you would like to see brought back or in what ways you think things could be improved.