Join the Congregation!|Monday, April 12, 2021
You are here: Home » Uncategorized » Padres Camp is High-Spirted

I cruised down to one of my favorite places in the whole wide world today, the Peoria Sports complex!  This isn’t your Dad’s PSCX, the facelift the Padres complex had during the offseason is impressive.   It oozes with a major league feel, from the curb appeal, to the locker room.  As they say, perception is reality, and it’s clear the new Padres owners want the players and staff to have a “think bigger” mentality.

My goal today was to see how the vibe in Padres camp is.  I’ve been to Peoria almost every year for the last decade and every camp is a little different and typically it evolves as spring training goes on.  With that said, it did seem high-spirited.  Always gracious, Will Venable came over to say hi, he’s all smiles and you can sense a different level of confidence after a break-out campaign.  Chase Headley appeared to have a weight lifted from his shoulders.  This time last year, contract talks and the pressure of repeating a monster second-half were looming.  Chase took a few minutes to say hello, chat about his dog, his son, and another on the way. 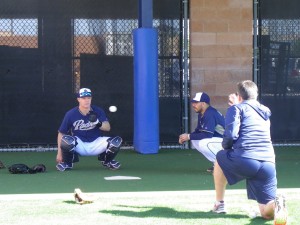 I caught A.J. Hinch spending time with Nick Hundley and Rene Rivera working on framing techniques.   The teaching and development never stops! The Padres are hosting a rookie camp for a select number of minor leaguers on the back fields.  Interesting to watch young kids that are very concerned with making an impression while you have a bunch of front office people and coaches playing catch up.

These are important weeks as the team begins to gel, but overall the team has an air of confidence that hasn’t been seen in quite a while.

Big thanks to Wayne Partello, Jesse Agler, Bob Scanlan, and Dennis Lin for taking a few moments today to talk Padres and catch up.  It’s always nice to feel welcomed.