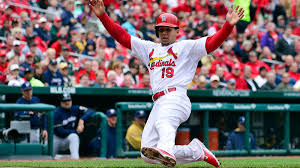 As the 2015 Winter Meetings commence in Nashville, so does the Padres’ offseason trade activity.

On Tuesday morning, it was confirmed that the Padres had dealt infielder Jedd Gyorko to the St. Louis Cardinals for outfielder Jon Jay. It was said that St. Louis will receive additional cash considerations as a part of the deal.

Gyorko, who made his major league debut with San Diego, hit .293 through three seasons with the club, with scattered minor league stints along the way. The 26 year-old second baseman signed a 5-year $35M deal with the club.

On San Diego’s end, the team picks up a gem in longtime St. Louis outfielder Jay, who served six seasons with the Red Birds. Signed through 2016, Jay hit .287 lifetime with the Cardinals, with a .354 on-base percentage and 227 RBI.

With the departure of first baseman Yonder Alonso and the expectation that Wil Myers could fill in nicely at that spot, fans can expect to see Jon Jay get a decent amount of playing time come spring of 2016.