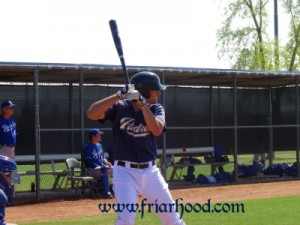 One of the top hitting prospects in the Padres organization, Nate Freiman was selected by the Houston Astros in the Major League portion of the Rule 5 Draft.  Freiman was a mid-season and post-season All-Star in 2012 for the double-A San Antonio Missions.

Two Cents:  It’s a shame to lose Freiman, but at this point he was going to sit and wait as we have seen with Matt Clark.  Their is no guarantee that the Astros will be able to keep him on the 25-man roster all season and it wouldn’t shock me to see him back in the Padres organization in 2013.  Carroll, an early pick in 2008, just never panned out.   One of those low ceiling, fast development guys that just didn’t develop.  He always seemed to be over-shadowed by other OFs and will now get a shot elsewhere.