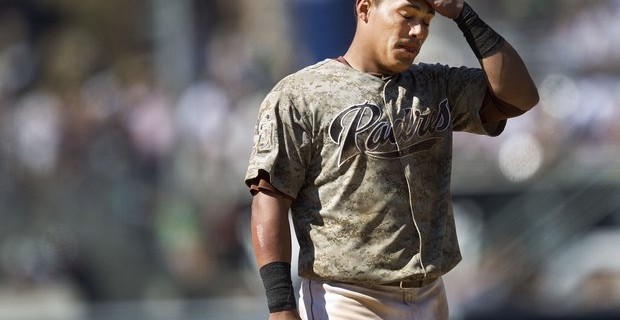 The San Diego Padres officially announced Tuesday evening that they have non-tendered Shortstop Everth Cabrera. Cabrera, the 28-year old veteran who has been with the Padres organization since 2008, had a torrid and unexpected end to his 2014 campaign after a hamstring injury and suspected DUI in September. With the announcement that the club has declined to continue working with Cabrera, the 6-year MLB veteran will now enter free agency.

Cabrera appeared in only 90 games last season, hitting the DL twice over the 2014 season. Cabrera posted a .232/.272/.300 line – a sharp contrast from his 2013 season numbers that earned him a spot on the National League All Star Team in New York. Unfortunately for Cabrera, he was suspended for the last 50 games of the 2013 season after being linked to the Biogenesis drug scandal that rocked rosters and teams across the league.

With the starting shortstop role figuratively left “open” with Cabrera’s departure, it’s safe to say that infielder Alexi Amarista – who played shortstop in Cabby’s absence – would make a sufficient replacement at that spot on the diamond for the time being.

While the future is unknown for the problematic Cabrera, his future with the club who gave him a second chance is almost certainly a done deal.

In the mean-time, the Padres under newly hired General Manager A.J. Preller continues to make aggressive attempts at signing big name free agents. Although the team has been unsuccessful up to this point, it appears that the new GM was given an additional spot to fill on his team.