Padres Out of the Race for Edwin Jackson 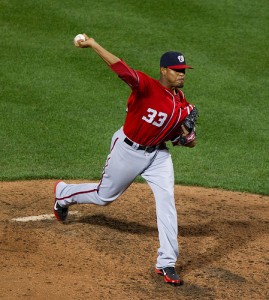 Padres are out on Edwin Jackson after refusing to go to 4 years….destination down to Cubs and Rangers

The 29-year old Jackson is seeking a four-year deal after signing a one-year deal with the Nationals last season in an effort to build up his value.  It should be noted that Jackson’s agent is Scott Boras.  This doesn’t mean that Jackson won’t come back on things, but at this point, the Padres are holding firm at three years.  This may open the door for Rick Porcello talks with the Tigers.  Stay tuned.

As always, your comments are welcome