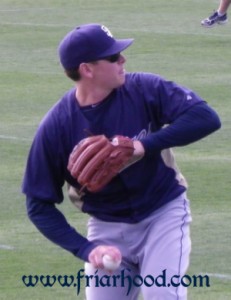 Right-Handed Pitcher Tim Stauffer will be returning to the big leagues, as the Padres own Corey Brock announced that the club had purchased his contract Friday afternoon. Stauffer’s promotion came on the heels of an announcement noting that outfielder Carlos Quentin was away on paternity leave for the birth of his son, Clark. Stauffer is not a fresh face to the organization, as he was on the Padres pitching staff between 2005 and 2012, sporting a 23-31 record and a 3.94 ERA in 96 games.

Stauffer was sent down to Triple-A Tucson in 2012 after stumbling out of the gates with a 5.40 ERA. Tim will be returning to the club, however, after the front office decided that his pitching efforts in Tucson were worth noting with a 2-2 record and 3.16 ERA in eight starts. What role Stauffer will play on the pitching staff has yet to be determined, but he could possibly return to the starting role soon.

In order to make room for Stauffer on the 40-man roster, the Padres made a corresponding move in designating RHP Thad Weber for assignment. Weber had appeared in 3 games for the big league club this season, giving up 2 runs over 9 innings pitched in relief. With the AAA club, Weber had a 4-1 record with a 3.93 ERA in six starts this season.