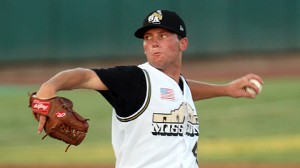 Robbie Erlin’s time back in Triple-A Tucson was short lived as it was announced early Saturday morning that the rookie southpaw would be returning to Petco Park to start Saturday’s game against the Blue Jays. The news came sometime after midnight after the Padres 4-3 victory in the 17th inning against Toronto during a post-game conference with manager Bud Black. Erlin will be the eighth different pitcher that the club will have used this season in their starting rotation.

Erlin made his major league debut with the club on April 30th earlier this season against the Chicago Cubs. During his previous tenure with the club Erlin faced only nine batters (a small sample size) over two innings pitched, giving up 2 runs on 3 hits for an overall 9.00 ERA in relief. Erlin has fared much better in Triple-A Tucson, sporting a 4-0 record over eight starts with a 3.79 ERA. The young pitcher has also struck out 37 batters in over 40 innings pitched with the AAA club this season.

Other Padres news came out during the press conference when Manager Bud Black noted that first baseman Yonder Alonso was “day-to-day” after being hit in the hand by a pitch during Friday evening’s game. Alonso had his right hand x-rayed shortly after leaving the game and the initial diagnosis was negative, although the club’s staff will re-evaluate Alonso’s hand sometime Saturday. Catcher Yasmani Grandal made the move to first-base following Alonso’s departure.

LHP Robbie Erlin will take the mound in Game 2 of the Padres series against the Blue Jays at 7:10pm Saturday evening at Petco Park.