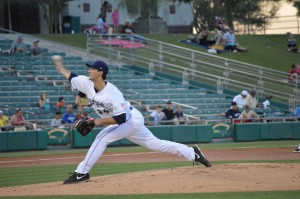 The Padres continued their shuffle of new arms and bullpen adjustments today as it was announced that RHP Burch Smith was going to rejoin the club in Miami for his third stint this season. Smith was first called up to the majors earlier this season to start against the Tampa Bay Rays in May, but struggled in the first three starts he was given at the major league level. In his short time with the club this season, Smith sports an 0-1 record with an 18.41 ERA (15 earned runs over 7.1 innings).

Smith has experienced much better success at the Double-A and Triple-A levels this season, posting a 1-2 record and 1.15 ERA in San Antonio and a 3-1 record with a 2.57 ERA in Tucson. Smith will be replacing LHP Tommy Layne, who has been optioned back to Triple-A Tucson.

Layne has appeared in 9 games with the big league club this season, posting an 0-2 record with a 2.45 ERA over 7.1 innings pitched. Layne has performed decently well down in Triple-A Tucson, despite his 1-3 record and 4.04 ERA, having struck out 16 and giving up only one homerun.

Smith will be joining the Padres in Miami for Friday evening’s game against the Marlins. First pitch is slated for 4:10pm Pacific Time, with Edinson Volquez (5-6, 5.67 ERA) taking the hill against Ricky Nolasco (4-7, 3.68 ERA).