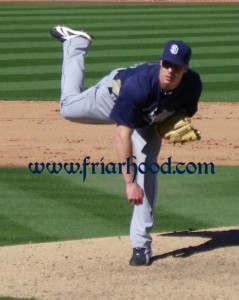 It looks like the Padres are making a switch in the bullpen as it was announced today that the club had recalled RHP Nick Vincent and optioned RHP Anthony Bass to Triple-A Tucson, according to Bob Scanlan. The reasoning for the move had not been revealed, but it is possible that Bass’ bullpen woes as of late may be the cause – a 4.55 ERA in 18 games (16 runs over 31.2 innings in relief). It was also announced that Bass would be making a starting appearance while in Tucson as well.

So far this season, Nick Vincent has posted a 4.15 ERA in 20 games with Tucson this season, but in his last 10 games the right-hander has posted a 1.80 ERA. Vincent made his Major League debut last season and impressed the club by giving up only 5 runs over 26.1 innings in 27 games. Vincent compiled a 2-0 record with a 1.71 ERA last season, but did not make it back to the big league club following Spring Training.