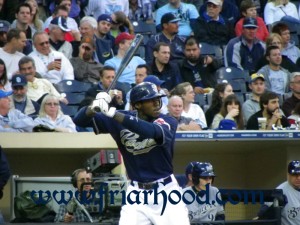 The Padres announced that outfielder Cameron Maybin would be reinstated off of the 15-day Disabled List and join the club in Denver this Thursday according to the Padres official twitter account. In order to make room for Maybin on the team’s roster, outfielder Kyle Blanks will be optioned down to Triple-A Tucson and take Maybin’s place where he has been playing during a rehab stint with the club. Blanks had accumulated a .277 batting average with the big league club this season, collecting 16 RBI and hitting 4 homeruns over a span of 35 games with the club.

Maybin hasn’t played for the Padres at the Major League level since April 15th against the Dodgers. The 26-year old outfielder had struggled at the plate this season, batting .091 with 1 RBI in 33 plate appearances. This was more likely than not due an injury that Maybin had suffered, and as such Maybin’s season came to halt after what was diagnosed to be an impingement of his right wrist. Cameron was placed on the 15-day DL following further inspection by club physicians.

During his rehab stint with Triple-A Tucson, Maybin has performed quite well, hitting for a .323 batting average and hitting 3 homeruns over the course of 38 plate appearances in 9 games. Maybin had also posted a .645 slugging percentage with his time with the T-Pads as well.

Maybin will be available to play and may see some action as the Padres continue their road trip on Thursday at Coors Field against the Colorado Rockies. Andrew Cashner (4-3) will take the mound against Jhoulys Chacin (3-3) at 5:40pm PST.