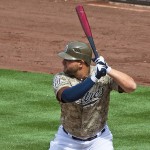 After one season of inconsistency at 1B, the Padres handed the job over to rookie Yonder Alonso (acquired in the Mat Latos trade). New Padres general manager decided that Alonso was a better option that the current top prospect, Anthony Rizzo and although most “experts” felt the two were both very good, Alonso was projected to play better in Petco National Park.

This was a down year for 1B in the NL, Votto and Howard were hurt most of the season, Pujols and Fielder went to the AL, and Adrian Gonzalez came to the west late. Power production as whole was down, but plenty of young 1B are developing such as Freeman, Davis, Goldschmidt, Belt, Rizzo, and Alonso. The power production most expected from Alonso never materialized. Although Yonder was a doubles machine, people look to 1B as a source of power and run production. In his first full season Alonso only hit nine homeruns (HR every 61 at-bats) and drove in only 62 RBI (hit .239 with RISP). This has got to improve in 2013.

As previously mentioned, Alonso was a doubles machine. I’m not going to compare him to other rookies, because he’s playing first base. The value of players such as Cozart, Rosario, and Frazier are higher because of the fact they play at more demanding defensive positions. In comparison to other first baseman Alonso held his own.

Alonso hit .270 or higher four of the six months and improved his average after the all-star break going from .263 to .285. Great indications that the 25-year old will be able to build on these numbers in 2013.