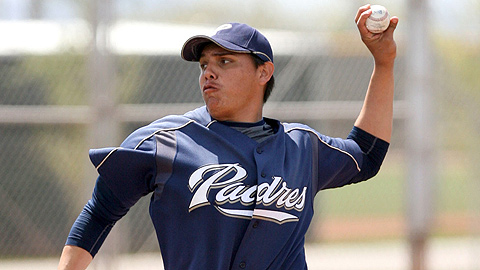 On November 30th, the Padres non-tendered Juan Pablo Oramas (Ranked as the #20 prospect on Friarhood.com, Ranked as the #12 prospect heading into 2012 by Baseball America).  Ten days later (12/10/12) the Padres were able to sign the 22-year old southpaw that is rehabbing from Tommy John surgery.

Here is what our own Peter Friberg had to say about Oramas heading into 2012:

Juan Oramas was described by outgoing Padres Scouting Director, Jason McCloud, as biggest potential to surprise in the system. Surprisingly, I actually have him ranked lower this year than I did last year. That’s a function of talent in the organization not a dip in ability with Oramas. At worst (barring injury), Oramas is a lefty out of the ‘pen. At best, he’s another #3 starter. He’s another vertically-challenged Padres pitcher with ability that exceeds his physical profile.

My two cents:  It’s going to take some time for JPO to rehab, but he’s a promising young lefty that has breezed through the system and I would expect a strong second half for him in AA San Antonio in 2013.